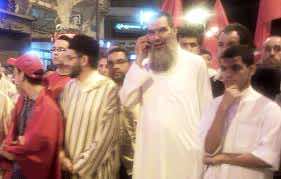 Arab Spring reform movements are prompting Salafist jihadists to join in the sweeping changes. In Morocco, where constitutional reforms are reshaping the national landscape, many of those now voicing loyalty to the monarch and commitment to dialogue are also the most notorious terrorists.

Hassan Khattab is among the prisoners and freed Salafist inmates at the heart of the movement. He is serving a 30-year prison term for leading the “Ansar al-Mahdi” terror cell, which included security officials, an imam, and two wives of Royal Air Maroc pilots. The cell members were convicted in 2008 of funding terrorist operations and planning a terror campaign against the Moroccan regime.

In an online letter to King Mohammed VI published in early September, the Salafist presented his renunciation of violence as part of what he described as a “re-evaluation”. Hassan Khattab issued “revisions”, in which he said that he adopted an initiative entitled “Munasaha and Reconciliation.”

A highly-anticipated new book by Moroccan writer Mountassir Hamada, the author of “Nous et l’organisation d’Al Qaida” (al-Qaeda and Us) and “De la critique de l’organisation al-Qaida” (A Critique of al-Qaeda) looks at the trend. In “Salafia Al Wahabiya in Morocco”, which will be published within the next few weeks, Hamada explains that signatories to Khattab’s proposal vowed not to “accuse society or Muslims of kufr without a Sharia-sanctioned basis”.

“The purpose of this letter is to brief you on the shifts that have taken place within the Jihadist Salafist current in Morocco, which is now going through a stage of evaluation and revision that would produce elites of preachers, scholars and science-seekers capable of keeping pace with political developments in our beloved country under your wise leadership,” Khattab wrote to the Moroccan monarch.

Khattab praised the constitutional reforms proposed by King Mohammed VI and said that he and his fellow prisoners in Morocco were willing to take part in social movements.

“We are with the monarchy institution and its rulers,” he said. “We’re prepared to help build a new Morocco that would be run with multiple visions and creative Islamic and political identities that would promote national constants to the level of creative and effective citizenship.”

The imprisoned extremist also voiced his rejection of the movement’s extremist tendencies. “The Jihadist Salafist current today truly believes in the importance of realising dialogue and debate with open-mindedness and an understanding of other cultures,” he wrote.

“It also believes in the need…to combat the wrong habits and concepts, extremism, and close-mindedness that have been practiced within the current for decades,” Khattab wrote.

He concluded by saying that the “Jihadist Salafist current has realised the clear mistakes and deviations that it has been involved in as a result of lack of knowledge.”

“It was so swept away with its whims that some of its members failed to deepen our constants; something that would totally undermine our nation’s values,” Khattab wrote.

Within a week of Khattab’s letter to the king, another move to re-evaluate Salafist ideas was embarked upon by repentant Salafist Sheikh Mohamed Fizazi. Known for his adherence to takfirist ideology, Fizazi blessed the September 11th attacks on the United States. He was arrested after the 2003 Casablanca bombings and received a royal pardon at the start of the Arab Spring.

Fizazi and other members of the “Moroccan Salafist Movement for Reform” have been trying to ally themselves with the youth-led February 20th Movement, and have actively joined protests since the end of Ramadan.

In his letter to King Mohammed VI, the man considered the leader of jihadist Salafism in Morocco called for the release of inmates who had been “unjustly imprisoned”.

“This long period time I spent in prison enabled me to mix with the prisoners of the so-called Jihadist Salafist current and to have full knowledge of all ideas that are prevailing among those prisoners,” Fizazi wrote on August 10th. “I became fully sure that injustice was done to many of them and they now implore you to rescue them from prison, given that they long to return to their community which they have missed.”

Fizazi in his letter points to “the conviction of many of those prisoners in the rejection of violence, recognition of the components of Moroccan nation, and actual willingness to take part in reconciliation project…especially as our nation now needs more than ever every and each member of its people”.

Mountassir Hamada addresses this issue in his forthcoming book, noting that Moroccan security services have trained experts in Islamist studies to deal with prisoners.

Hamada also talks about failings by the authorities, whether within prisons or outside the prison environment. He says that these failings are obvious, given the number of Salafist prisoners who committed terrorist acts after being released.

He cites the example of Abdalfatah Raydi, who blew himself up in an internet café in Casablanca on March 11th, 2007. This was following a royal pardon for his imprisonment in connection with the 2003 terrorist attacks.

While the author links these failings to the actions of the security forces, he also cites failings from the Salafists themselves, as seen in their “re-evaluations”.

The first r was undertaken by Ali Aallam, who denounced the activities of al-Qaeda against Muslim countries. Jailed Moroccan Islamist Mohamed Abdelouahab Rafiki, also known as Abu Hafs, followed in March of 2010. Abu Hafs was the first high-profile Moroccan prison inmate to endorse the Libyan Islamic Fighting Group’s 2009 letter decrying terrorist violence against civilians. His support for the LIFG rejection of al-Qaeda was groundbreaking.

But the weaknesses in these re-evaluations come from the fact that they are disparate and lack a unified vision, Mountassir Hamada argues in his new book. They also lack any academically-based references or endorsement from skilled ulemas, Hamada says.

Meanwhile the “Mountada Al Karama” (“Forum for Dignity”) association is campaigning for reconciliation with imprisoned Salafists. Ever since March, when the National Human Rights Advisory Council (CNDH) was formed from what had been the Advisory Council on Human Rights (CCDH), the body has been pursuing a dialogue with inmates in the jails of Kenitra, El Jadida, Tangier, Agadir and other locations.

Together, the groups are seeing success in the prisoner outreach initiative.

“There is a category of Salafist prisoners who are being held because of their views and are not involved in terrorist affairs. This category should benefit from a dialogue process to lead them to change their views. As part of the mediation we have conducted in partnership with the CNDH, many have changed their ideas and written letters in which they seek forgiveness,” points out Mountada Al Karama Vice-Chairman Abdellali Hamiddine.

Hamiddine says these “repentants” have clearly written “that they are in favour of the monarchy, the Malekite rite, that they are against violence and against excommunication from society”.

According to Abdellali Hamiddine, prisoners’ families have played an important role in convincing many to change their ideas, as has the ongoing dialogue.

But “there are still prisoners who will not budge from their positions and defend their violence-based ideas”, he adds.