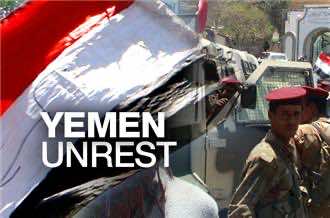 At least 21 killed in fresh violence in Sanaa, a day after dozens were shot dead by forces loyal to president Saleh.

At least 21 people have been killed and 50 injured in fresh clashes on the streets of the Yemeni capital, Sanaa, a day after 26 anti-government protesters were shot dead and hundreds wounded by troops and gunmen loyal to President Ali Abdullah Saleh.

According to reports, Monday’s deaths occurred as snipers fired upon passers-by and peaceful protesters demonstrating at Change Square.

“Help me, oh my God look at his slaughter!” said the father of a boy who died from a gunshot wound to the head.

“We were just in the car on Hayel Street (near the fighting). I stepped out to get some food and left my two boys in the car and I heard the older one scream. The little one was shot straight through the head.”

The clashes came as protesters tried to push further into territory held by government forces after extending their camp overnight.

The opposition had earlier vowed to press ahead with demonstrations despite Sunday’s crackdown.

Meanwhile, Abdu al-Janadi, Yemen’s deputy information minister, rejected accusations that the regime had planned attacks on the protesters and accused what he described as “unknown assailants” of carrying out the acts.

“This attack was prepared so as to kill as many people as they could. … This is a plot against all the Yemeni people,” al-Janadi told a British television station.

Also on Monday, two people were killed and 10 injured when security forces loyal to the president opened fire on protesters in the city of Taiz.

Tens of thousands of protesters calling for an end to president Saleh’s 33-year rule took to the streets of the capital on Sunday.

“I talked to one of the protesters. He told me shots were fired on chests, legs, and other parts of the body,” he said.

Witnesses said security forces and armed civilians opened fire on protesters who left Change Square, where they had camped since February demanding regime change, and marched towards the city centre.

“I spoke to a doctor yesterday who said that one of the wounds he’d seen in someone’s back was far bigger than could have been a rifle,” said a freelance journalist. “It was a big circle in the man’s back suggesting it was, you know, it was either anti-aircraft or RPG that was used.”

The journalist said he counted at least 16 bodies piled up in a mosque and most of them were shot in the head.

“There are three hospitals in Sanaa filled to the brim with the injured. One doctor said he expects the death toll to rise over to 50 by tomorrow morning.”

Munir al Mawri, a Yemeni analyst, said the US was making a big mistake by taking a neutral stance and dealing with the crackdown as if it were a political crisis that could be solved by the opposition and the government.

The renewed crackdown on protesters came amid reports that Abdrabuh Mansur Hadi, Yemen’s vice-president, would sign a Gulf Arab initiative to arrange for a transfer of power in Yemen “within a week”.

“Within a week, the vice-president will sign the Gulf Initiative in the name of the president,” a high-ranking Saudi official, who requested anonymity, told reporters.

Last week, Saleh authorised Hadi to negotiate a power transfer with the opposition.

The initiative was proposed by the six-nation Gulf Co-operation Council and sets the path for a peaceful transition of power from Saleh, who has ruled Yemen since 1978.

According to the Saudi official, “among the guarantees demanded by Saleh are that his son be kept in the next government”.

Saleh left the country three months ago for Saudi Arabia where he has been recovering from a June 3 attack on his presidential compound.

The president has since January faced protests over nepotism and corruption from reform activists inspired by the Arab Spring.