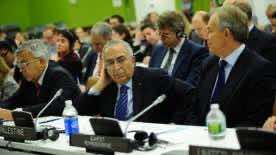 A day ahead of the UN General Assembly in New York, representatives from the Mideast quartet – the US, European Union, Russia and the UN – scrambled to avoid a diplomatic showdown over a Palestinian bid for full UN membership on Monday.

The United States and Europe stepped up a diplomatic scramble Sunday to avoid a UN showdown on the Palestinian plan to seek full UN membership, which the US administration has vowed to veto.

US, European Union, Russian and United Nations officials were all involved in the bid to seek a face-saving way out of the looming confrontation at this week’s UN General Assembly in New York.

Blair expressed hope that a deal could be reached. “I think there is a way of avoiding a confrontation,” the former British prime minister told US broadcaster ABC.

Diplomats said that with so few details available of the demand to be made by Palestinian president Mahmoud Abbas on Friday, frantic talks were likely to continue right up to the last minute.

Frustrated by the lack of progress with Israel, Abbas has said he will ask the UN Security Council to approve full UN membership for a Palestinian state.

The United States, a permanent member of the Security Council, has said it will veto any request to the 15 nation body. The United States and Israel insist that only direct talks can set up an accord to create a Palestinian state.

If a veto is wielded, the Palestinians could then go straight to the UN General Assembly to seek an elevated observer status. It would almost certainly get a majority of the 193 members and no veto is possible.

The United States is trying to convince Security Council members to oppose or abstain in any Palestinian resolution. If it does not secure nine votes, any resolution would fail and the US veto would not be necessary, reducing any embarrassment.

Twelve months ago, US President Barack Obama said he wanted to see a Palestinian state at the United Nations within a year.

Britain, France and Germany will have decisive votes on the council. All of their UN envoys say that no decision on how to vote has been taken because they have not seen a Palestinian resolution.

The Palestinians’ willingness to return to direct talks will play a central role in their decision, envoys added.

Israel’s Prime Minister Benjamin Netanyahu said ahead of his trip to the UN General Assembly, that any Palestinian bid through the Security Council will fail.

“In the end, after the smoke clears and after everything that happens at the UN, the Palestinians will come to their senses, I hope, drop these moves to bypass negotiations and return to the table in order to bring peace to us and our neighbors.”

Direct Israeli-Palestinian talks were frozen one year ago after Israel refused to renew a moratorium on Jewish settlements in the West Bank.

Netanyahu said any General Assembly resolution would be less important. “They could decide that the sun rises in the west and sinks in the east but it doesn’t have the same weight and the same importance as the Security Council.”

General Assembly recognition of a Palestinian state would allow increased international rights, however. Some officials say the Palestinians could become a signatory to the International Criminal Court and launch a complaint against Israeli military action.

Maen Rashid Areikat, the Palestinian representative in Washington, said the Palestinian Authority understood that its UN campaign would bring largely symbolic changes as Israel is “the stronger party.”

“The aim of this is try to elevate the Palestinians to a more equal footing so that this disparity that existed over the last 18 years, which allowed Israel to exploit it to its advantage, can end and they can talk now to an equal member state of the United Nations,” Areikat told CNN.

Quartet envoy Blair is seeking a formula that would allow for greater recognition of a Palestinian state and a path back to direct talks which could satisfy the United States.

“What we will be looking for over the next few days is a way of putting together something that allows their claims and legitimate aspirations for statehood to be recognized whilst actually renewing the only thing that’s going to produce a state which is a negotiation directly between the two sides,” Blair told ABC.