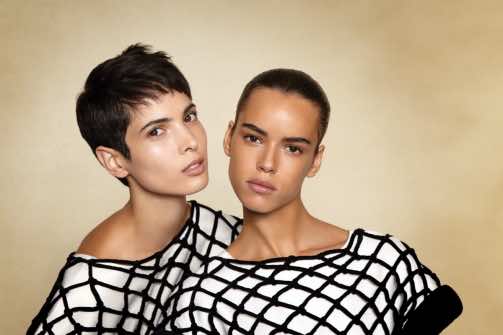 When 20-year-old Hind Sahli, a brown-skinned young woman with dark shoulder-length hair, was growing up in Casablanca, she used to watch television shows like America’s Next Top Model and daydream about being on a fashion runway. Sahli was appropriately tall and thin, but in Morocco, the beauty ideal is a voluptuous figure. She was mercilessly teased for her spare frame and would soothe her hurt feelings by sashaying around her living room.

Sahli, who is both Arab and Muslim, was also growing up in a culture where modeling bumps up against significant cultural taboos. As a matter of religion and tradition, female modesty is expected—not the kind of provocative and exhibitionist behavior the mainstream fashion industry rewards.

As Sahli strutted around the room, her mother—a deeply religious homemaker who wears the hijab—was amused by these preoccupations. Sahli’s father, a policeman, was not. Still, neither of them had much to say. It was just make-believe, after all.

About that same time, in the tourist town of Nabeul, Tunisia, a young woman with the gamine features of Audrey Hepburn was having similarly fanciful thoughts. Hanaa Ben Abdesslem had always drawn lingering glances because of her soaring height and impossibly thin frame. The stares made her self-conscious and shy. But when she flipped through fashion magazines, she’d gaze at those “tall, thin, beautiful women, and I thought perhaps someday I could feel at ease.”

Five years ago, the Arab world was mostly disconnected from the global modeling network. In the absence of established agencies and international magazines, modeling wasn’t even a defined profession. Foreign travel was difficult both logistically and culturally. Then there were all manner of preconceived notions from around the globe about what it meant to be an Arab woman.

To accomplish their goals, Sahli and Ben Abdesslem would have to step outside the boundaries of tradition, leave the security of their families, and breach the confines of once unyielding cultures and prejudices—not just in the Arab world but beyond it.

And that’s precisely what they have done. In the last year, especially, both Sahli and Ben Abdesslem have made significant headway—between them, they have walked in shows for labels such as Givenchy, Ralph Lauren, Louis Vuitton, Jean Paul Gaultier, Vera Wang, and Phillip Lim. They have posed for Italian Vogue and French Vogue and shot advertisements for Top Shop and Lancôme.

Though they have crossed paths only a handful of times, the two women are now inexorably linked through timing, culture, the assumptions others make about them, and their desire to represent 21st-century Arab women to the world.

The fashion industry tends to treat cultural differences as entertaining biography; ethnicity as little more than aesthetics. But the recent experiences of Sahli and Ben Abdesslem show them to be charting a new course on the global runway. For them, fashion is not about gossipy chatter and luxurious indulgences, or even primarily about commerce and entertainment. It is about empowerment, opportunity, and modernity. It is a chance for these young women to be seen, to be heard, and, quite simply, to be.

Paradoxically, women from the Arab world have long been among the most voracious consumers of fashion. Indeed, the economics of the French haute couture industry relies on Middle Eastern customers. But their consumption is mostly private. The industry adores places such as Marrakech as backdrops for an exotic fashion shoot. Yet while the runways have welcomed models from South America, Eastern Europe, Africa, and the rest, Arab women have until now been largely absent.

The changes that made Sahli’s and Ben Abdesslem’s ascents possible began some two years ago, when the catwalks were notably homogenous. Blonde, pale, clonelike models from Eastern Europe dominated. Diversity became a cause célèbre, pushed by activist and former model Bethann Hardison and by Diane von Furstenberg, president of the Council of Fashion Designers of America.

“We have a responsibility in the fashion community to reflect global beauty, to reflect the new economies and reflect their financial strengths,” says Kyle Hagler, senior manager at IMG Models, who works with Ben Abdesslem. With prodding, agencies broadened their search for fresh faces. They turned to North Africa. “I think we all became socially aware,” Hagler says, adding, “We have a responsibility to make sure that it goes on.”

The world, of course, also changed. The Arab Spring, which began in Tunisia, saw protests, revolts, and civil war sweep through North Africa and into the Middle East. The region convulsed with citizen demands for democracy, openness, and opportunity.

Indeed, as Ben Abdesslem prepared to leave for her first Fashion Week in New York, the streets of Tunis were in the throes of weeks-long turmoil. It was Jan. 14—a Friday—when she arrived at the Tunis-Carthage International Airport for an early-morning flight. By the time she landed in New York, the Tunis airport had been shut down, and the country’s president, Zine al-Abidine Ben Ali, had fled to Saudi Arabia. Everything had changed.

“I was happy and excited for my country,” she says, “but I was not there.”

Ben Abdesslem returned home a few weeks later to a postrevolution Tunis. When I visited her in mid-August, during the final days of Ramadan, signs of the tumult were scattered across the landscape. Amid the luxury resorts draped in pink bougainvillea and the mosaic-covered arches of the old town, a mansion that once belonged to Ben Ali’s extended family was deserted and marred by the angry graffiti of protesters. Beyond the bustle of shoppers who slipped into the Medina and down the narrow streets of the souks, a government finance building was surrounded by glinting razor wire, patrolled by military officers, and flanked by a grim tank.

The residents went about their business. The yellow taxis treated red lights as optional. Women lined up at bakeries to buy the sweet cakes that punctuate the evening meal at the end of each daylong fast. Tour buses continued to disgorge camera-wielding Europeans, but tourism, Tunisia’s economic engine, has fallen off 70 percent since the revolution.

Though Ben Abdesslem’s work has now broadened her points of reference to include New York, Paris, and Milan, she still calls Tunisia home. She had driven into the capital from Nabeul, about an hour away, with her older brother Walid, who teaches drama and seems to be her co-conspirator in dreaming big. The 21-year-old model stood out. She has, of course, the physique of a reed. Her dark, wavy hair is clipped into a pixie. That day she wore cobalt-blue satin trousers and a tight black strapless top stamped with gold flowers. She could have stepped directly off a Dries Van Noten runway.

Her career began with a modeling competition in Lebanon, a kind of America’s Next Top Model for the Arab world. (The Tyra Banks juggernaut actually taped a cycle in Morocco—but with American contestants.) Ben Abdesslem didn’t win, so she returned to Nabeul planning to study civil engineering and go into the family construction business. But soon she was introduced to a Saudi Arabian fashion scout who brought her to IMG.

“It was difficult to make my family understand” her desire to model, Ben Abdesslem says with the help of a French translator. “Travel is difficult. It’s always the guys who can do what they want. But the girls stay with their moms and take care of the home. But thanks to my brother,” she says. “He explained.”

Walid Ben Abdesslem, a slender young man with chiseled features and an easy gait, points out that if the family had been from the south, “it would have been more of a problem. Families there are more traditional, the culture more closed. But because of the tourists [in Nabeul], it’s more open.”

Ben Abdesslem points to one sole role model—Farida Khelfa, the French-born daughter of Algerian immigrants, who rose to fashion fame in the 1980s. But no other Arab models followed, Ben Abdesslem notes. “I want to be the role model, so other women can see that it’s possible.”

She has already become a cultural ambassador of sorts. In New York, the other models want to know what life is like in Tunisia. Some don’t know that the small country of about 10 million is nestled between Algeria to the west and Libya to the east. (This summer, Ben Abdesslem traveled south to the Libyan border, where she did volunteer work with refugees from the civil war there.)

They assume she’s extremely conservative. “In New York, a lot of people are thinking I’m wearing the burqa, the veil, everything.” She recounts how she carefully negotiates modesty and opportunity. She will not pose nude, for example. But she models swimsuits and the other revealing frippery of the runway. It is, she said, just business.

Most of all, Ben Abdesslem is keen on shattering stereotypes—about models and about Arab women. “I want to give a good example of the Arab woman,” she says. “I think they want me to speak for them as well.”

Hind Sahli has also taken on the role of tutor and diplomat—not by choice but by default. And with a smile and a shrug she exudes both patience and exasperation.

“Everyone in America thinks Muslims are dangerous. But that’s not the truth. [Terrorists] are crazy; that’s not religion at all,” Sahli says. “I’m a Muslim girl. I’m tolerant. My country is not a bad thing at all.”

Sahli, who has just returned from Tangiers to New York, has suggested Balthazar, in SoHo, for a conversation over breakfast—or, more precisely, a double espresso, the universal meal of models. Wearing a slim-fitting black dress sparkling with black paillettes and a pair of dark-rimmed, cat-eye glasses, she fearlessly and cheerfully barrels through English—which she is just learning—occasionally leaving unconjugated verbs in her wake. A translator helps when a word doesn’t come quickly, but mostly, Sahli is proudly self-reliant.

She got it into her head to model when she was a teenager. At 16, she showed up at a local fashion magazine, armed with business cards she’d printed up herself. She was directed to Elite—the only international agency in Casablanca. Agents thought she had potential, if she lost a bit of weight. They were willing to send her to Paris, but she couldn’t get a visa. She had to wait two years before she could reapply.

Sahli’s mother was frightened by the prospect of her daughter going abroad; her father was grudgingly open-minded. Her older sister, who works with a local group that encourages women to be more modern, was her advocate.

If Sahli had a role model, it was Brazil’s Adriana Lima, a Victoria’s Secret “Angel” with a complexion close to that of Sahli. “You didn’t see a lot of girls in the shows to make me feel it could happen,” she recalls.

Finally, at 18, Sahli went to Paris, where “all the girls were blonde and blue-eyed.” But Sahli did not cower. She auditioned for designers, listened to her agents. She’d gotten to Paris, after all, so anything was possible. “It’s not something intimidating to me,” she says of her part in redefining images of female beauty. “Here’s all these blonde girls—maybe they should change that. Women are not only blonde girls.”

Sahli scored a coup when Steven Meisel photographed her for the May 2010 Italian Vogue. Marc Jacobs booked her for the Louis Vuitton show in Paris. Now, she adds proudly, her photo has a place of honor back home—in her old secondary school.