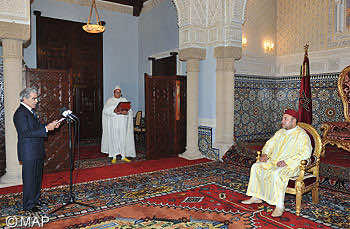 In his address before HM the King of Morocco on Monday on the occasion of the presentation of the annual report on the economic, monetary and financial situation for the year 2010, Governor of Bank Al-Maghrib (Central Bank), Abdellatif Jouahri, said that the Moroccan economy has showed better-than-expected results in 2010, particularly in the growth rate and foreign exchange reserves, mostly on the back of robust domestic demand and better external demand.

The Governor of Bank Al-Maghrib pointed out that gross domestic product grew markedly, in response to the performance of non-agricultural activities. Meanwhile, current account deficit decreased from the year 2009, thereby contributing to maintaining the level of foreign exchange reserves unchanged from one year to the next.

Concerning fiscal policy, Jouahri indicated that the year 2010 registered a significant rise in overall expenditure, mostly driven by higher subsidization costs which more than doubled from the previous year. He said that this development caused budget deficit to double as well, notwithstanding the slight improvement in tax revenues.

He added that despite the continued rise in global commodity prices, inflation in Morocco did not exceed 0.9 percent, as a result of the continued price-support policy.

He further said that Bank Al-Maghrib in 2010 stepped up efforts to harmonize the national banking prudential regulations with the best international standards. The Bank, he stated, also continued to develop monetary policy, strengthen financial inclusion, and improve relations between credit institutions and their customers.

The central bank Governor went on to say that the various challenges facing Morocco’s economy, in an increasingly volatile and complex international environment, require enhancing public policies’ efficiency. He stressed the need to provide the major orientations and strategies adopted by our country with governance mechanisms capable of improving their effectiveness and implementation.

In this context, Jouahri emphasized the importance of defining the priorities of the various sectoral plans and ensuring consistency between them, while estimating their impact on the state budget and external accounts, compared with the desired objectives.

He then reaffirmed the central bank’s continued determination to support and contribute to the success of the large-scale projects undertaken by Morocco under the leadership of His Majesty, particularly the advanced regionalization project and the Casa Finance City project.

The Governor of Bank Al-Maghrib further underlined that the progress Morocco has achieved since His Majesty the King came to the Throne will undoubtedly be bolstered by the leading institutional initiatives and political reforms His Majesty has launched, adding that these constitute important achievements whereby Morocco will significantly strengthen its position among the developing countries.