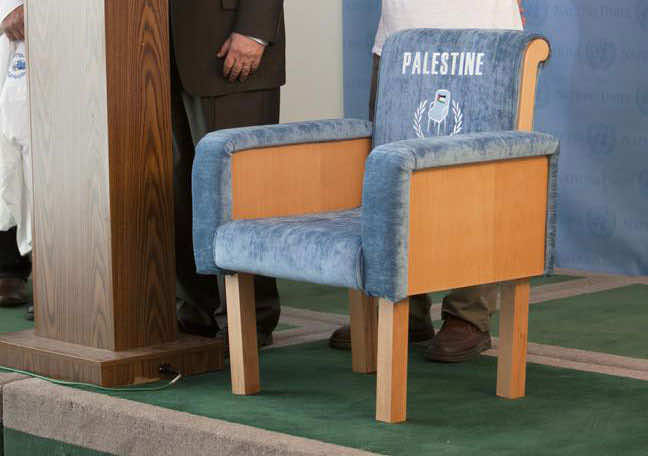 The President of the Palestinian Authority, Mahmoud Abbas, told Secretary-General Ban Ki-moon today that he intends to submit an application this Friday for Palestine to become a United Nations Member State.During their meeting, which took place at UN Headquarters on the margins of the 66th session of the General Assembly, Mr. Ban informed Mr. Abbas of his intention to perform his duties under the UN Charter. Palestine currently has observer status at the UN.According to the provisions of the Charter, the Secretary-General is tasked with verifying a letter requesting UN membership, following which he sends it to the Security Council and the General Assembly.

The application is considered by the Council, which decides whether or not to recommend admission to the 193-member Assembly, which has to adopt a resolution for the admission of any new Member State.

“The Secretary-General reiterated his support for the two-State solution and stressed his desire to ensure that the international community and the two parties can find a way forward for resuming negotiations within a legitimate and balanced framework,” Mr. Ban’s spokesperson, Martin Nesirky, told reporters.

The Secretary-General also discussed with Mr. Abbas the ongoing efforts in this regard by the diplomatic Quartet, comprising the European Union, Russia, the UN and the United States.

Israeli-Palestinian peace talks have been stalled since late September 2010 following Israel’s refusal to extend a 10-month freeze on settlement activity in the occupied Palestinian territory.

That decision prompted Mr. Abbas to withdraw from direct talks with Israeli Prime Minister Benjamin Netanyahu, which had only resumed a few weeks earlier after a two-year hiatus.

In a related development, the Special Adviser to the Secretary-General on Sport for Development and Peace, Wilfried Lemke, has just concluded a three-day visit to Israel and the occupied Palestinian territories.

“At a time when the eyes of the world are turned to the region once again and when the question of Palestinian statehood is highly prominent on the international agenda, the Special Adviser is determined to continue his work in mobilizing the power of sport to open up channels of dialogue and mutual understanding, and driving social development in the region,” stated a news release issued by Mr. Lemke’s office.