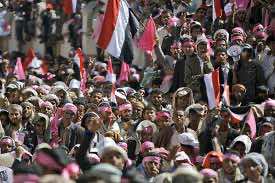 Secretary-General Ban Ki-moon today strongly condemned the “excessive use of force” by Yemeni Government security forces against unarmed protesters, resulting in scores of people killed and many more injured in the past few days.In a statement issued by his spokesperson, he called on the country’s authorities to protect civilians and uphold their obligations under international law in the escalating unrest between security forces and protesters seeking to oust President Ali Abdullah Saleh, part of a wider wave in the Middle East and North Africa that has toppled the long-time rulers of Egypt, Tunisia and Libya.Mr. Ban urged all political players to engage closely with United Nations Special Adviser Jamal Benomar who is currently in Sana’a, the Yemeni capital, working closely with the Gulf Cooperation Council (GCC) and other international partners to facilitate a peaceful solution to the political impasse.UN Deputy High Commissioner for Human Rights Kyung-wha Kang also said today that the Yemeni Government could not use its contention that it was fighting terrorists and supporters of the Al-Qaida movement as a pretext to attack peaceful demonstrators.Delivering a report by an assessment team from the UN Office of the High Commissioner for Human Rights (OHCHR) to the UN Human Rights Council in Geneva, she said the mission had identified serious violations including arbitrary arrest, cases of torture and withholding of medical treatment as reprisals for taking part in the protests.

The team, which visited Yemen from 28 July to 6 July, called for an independent probe into alleged human rights abuses committed since the start of protests earlier this year. Since its visit, the violence has resumed with a new ferocity, with 50 killed and scores more injured in the past two days, according to media reports.

Yemeni Foreign Minister Abu Bekr Abdullah Al-Qirbi said his Government welcomed regional and international efforts to find a political solution on the basis of the constitution and democracy to strengthen the principle of peaceful transfer of power and prevent Yemen from descending into a cycle of violence and conflict.

Mr. Saleh was keen to safely implement the GCC initiative to transfer power and maintain the unity, security and safety of Yemen, he added, noting that the Government had given the OHCHR team evidence of abuses by anti-Government militias against citizens, security and military personnel, while accusations against the security organizations lacked a basis.

An independent and neutral national commission formed by all parties to investigate evidence-documented rights violations could be established, he said