New York - Morocco will be among the five Arab countries that stand to benefit from the G-8 Deauville Partnership. The partnership launched last May by the G-8 to help countries that have embarked on democratic reforms is intended to ensure a smooth transition towards democracy, as well as sustainable development. In addition to Morocco, Egypt, Tunisia, Jordan and Libya are among the beneficiaries of the Deauville Partnership. 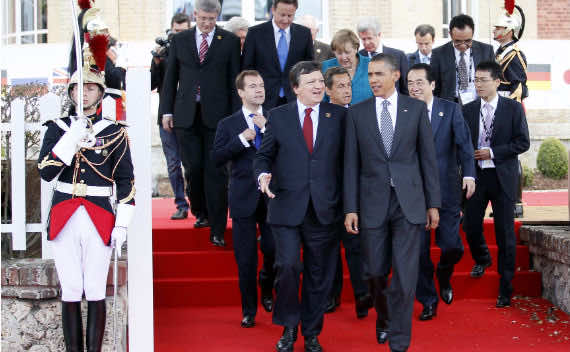 By
Adnane Bennis
-
Adnane Bennis is a national of Morocco, obtained his Bachelor’s Degree in Computer and Information Science from East west University in Chicago.
Sep 20, 2011
Spread the love

New York – Morocco will be among the five Arab countries that stand to benefit from the G-8 Deauville Partnership. The partnership launched last May by the G-8 to help countries that have embarked on democratic reforms is intended to ensure a smooth transition towards democracy, as well as sustainable development. In addition to Morocco, Egypt, Tunisia, Jordan and Libya are among the beneficiaries of the Deauville Partnership.

According to the draft communiqué of the Deauville Partnership Foreign Affairs Meeting that will be  held today on the sidelines of the sixty-sixth session of the UN General Assembly, which Morocco World News has obtained, in light of the aspirations of people in the Arab world for greater freedom, justice and human dignity, the Deauville Partnership is a “political and economic response from the G-8 and its Partners to the historical events underway in the Middle East and North Africa.” The communiqué further noted that the partnership is “aimed at the MENA countries that are engaged in a tangible and credible transition towards free, democratic and tolerant societies, either through a regime transformation or an evolutionary process.”

The partnership will adopt a step-by-step approach, will be based on the request of each country and remain open, inclusive and respectful of national sovereignty.

As stated in the Ministerial communiqué, the Deauville Partnership has two components: political and economic. The economic component will consist of a set of actions that mobilize financial resources that are geared towards promoting reforms and helping governments to meet the legitimate aspirations of their people. This goal will be achieved through the promotion of “sustainable growth, economic and social integration, economic modernization and integration into the regional and global economy,” reads the draft communiqué.

The political component will consist of supporting the process of entrenchment of democracy in the region, encouraging the adoption of governance reforms, strengthening the rule of law, promoting human rights, combating corruption, supporting civil society, as well as empowering youth and women.

The strengthening of the rule of law is among the primary tools that will be used to help the five Arab countries achieve a successful transition towards genuine democracy. Separation of power, equality of citizens under the law, transparency in the electoral process and the independence of the judiciary are among the areas that the partnership will focus on.

The partnership will also provide assistance with regards to the main areas of concern for the majority of Arab people, and which was among the reasons that triggered the unprecedented and historic uprisings throughout the Arab region, namely the safeguarding of fundamental rights. At the forefront these are freedom of opinion, expression, association, assembly and freedom of the press.

In addition to the G-8 countries, the Deauville Partnership is supported by Kuwait, Qatar, Saudi Arabia, Turkey and the United Arab Emirates.

Major international and regional organizations, such as the United Nations, the World Bank, the International Monetary Fund, the Arab League, the Union for the Mediterranean and the Organization for Economic Cooperation and Development (OECD) will also support the partnership.

After the timid manner in which many Western countries responded initially to the uprisings in the Arab world, many people in the region question the will of the G-8 to help Arab countries transition towards genuine democracy. Most people believe that this assistance is not aimed at helping these countries address their economic, societal, and political problems, but rather to safeguard the geopolitical and strategic interests of the G-8 countries in the region.

The case of Libya is cited by scores of Arabs who have voiced their rejection of prolonged western interference in Libyan affairs and fear that the sacrifice made by thousands of Libyans to free their country from the tyranny of Gaddafi will be wasted. After the downfall of Gaddafi, people in the region believe that Western countries should leave the Libyan people and allow them to take the destiny of their country into their hands without foreign interference.