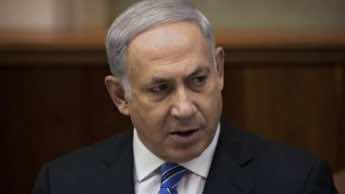 Israel Prime Minister Benjamin Netanyahu said Monday that he wanted to resume peace talks with Palestinian Authority president Mahmoud Abbas, calling for a meeting in New York before Abbas puts a bid for statehood to the United Nations.

As the Palestinians edged closer to seeking statehood recognition from the United Nations, Israeli Prime Minister Benjamin Netanyahu called for Abbas to meet with him in New York. The Israel leader said he wanted to resume peace talks, upping the pressure on Abbas and building on the frenzied diplomacy swirling around the Palestinians bid.

Regardless, Abbas said he had not been swayed by what he called “tremendous pressure” to drop the bid for United Nations recognition and instead to resume peace talks with Israel. Senior aides to the Palestinian leader said Abbas was undaunted by threats of punitive measures.

U.S. Secretary of State Hillary Rodham Clinton said, however, there was still time to find a solution to the diplomatic crisis.

Clinton told reporters in New York that the U.S. is talking with all sides to defuse the standoff, noting that the week was young and there were still several days to seek compromise.

She joined Netanyahu in calling for new talks and repeated the U.S. position that the only path to a separate state for Palestinians is through negotiations with Israel.

Nabil Shaath, senior aide to Abbas, told The Associated Press that the Palestinian leader informed U.N. Secretary-General Ban Ki-moon during their meeting Monday that he would present him with a letter requesting full membership on Friday, ahead of Abbas’ speech to the General Assembly. Abbas also met with French Foreign Minister Alain Juppe and European Union foreign policy chief Catherine Ashton.

Any candidate for U.N. membership must submit a letter to the secretary-general stating it is a “peace-loving” state and accepts the U.N. Charter. Ban is expected to examine the Palestinian letter and then send it to the 15-member U.N. Security Council which must give its approval before a vote in the larger General Assembly.

Another Abbas aide, Mohammed Ishtayey, said the letter will state:

“Palestine is a peace-loving state and has contributed to human civilization, that it has succeeded in building state institutions.” It would also include the need to consider the pre-1967 Mideast War borders as those of the Palestinian state, he said.

Shaath said the secretary-general promised to “speed up the discussion of the request” in his office.

Palestinians have for decades complained of being guests in their own land. Although any submission by the Palestinians could wait weeks or months for U.N. action, it has sparked a flurry of diplomatic activity with Mideast mediators scrambling to find a way to draw the two sides back to the negotiating table.

Shaath said last ditch efforts to dissuade the Palestinian president from approaching the Security Council had failed and that offers had fallen short of Palestinian aspirations. He said Palestinians had been threatened with harsh punitive measures but that they had decided to move ahead nonetheless.

The comment appeared to refer to the warnings by some in the U.S. Congress that current and future financial aid to the Palestinian Authority could be in jeopardy if they move ahead with the membership bid.

Each side in on-again-off-again Israeli-Palestinian talks has accused the other of being an untrustworthy and intransigent participant in the peace process.

In a statement, Netanyahu called on Abbas to begin “direct negotiations in New York and continue them in Jerusalem and Ramallah.” But the statement provided no other details or indications that Netanyahu was willing to cede to any of the Palestinians’ demands.

Ban “reiterated his support for the two-state solution and stressed his desire to ensure that the international community and the two parties can find a way forward for resuming negotiations within a legitimate and balanced framework,” U.N. spokesman Martin Nesirky said after the secretary-general met with Abbas.

The comment underscored the desires of some members of the Quartet of Mideast mediators – the U.S., the U.N., the European Union and Russia – that Palestinian statehood should not be granted before a resumption of peace talks. While the four international mediators have repeatedly called for renewed negotiations, Russia supports U.N. membership for Palestine.

The long-stalled negotiations have been unable to solve key issues including Israeli settlement building in the West Bank and the status of east Jerusalem, which the Palestinians want as their capital.

Quartet envoys met for the second time in two days, trying to craft a way forward that would be enough to persuade the Palestinians to drop their bid and have enough caveats for Israel to get its support. Clinton and Russian Foreign Minister Sergey Lavrov agreed at a Monday night meeting that the Quartet envoys should meet again Tuesday, officials said.

To address the Palestinian concerns, Western officials have discussed the possibility of including some timeframes, however vague, in any statement put out by the Quartet, officials said. These would focus on the restart of Israeli-Palestinian talks and signs of tangible progress once negotiations begin.

A U.S. official, speaking on condition of anonymity to discuss the sensitive diplomatic work, said progress was being made on a joint Quartet statement that would include a modest upgrade to Palestinian status at the U.N., address Israel’s demand that it be recognized as a Jewish state, and set a broad timeline for renewed negotiations.

The timeframe wouldn’t be a deadline, as such, but would be aimed at addressing the Palestinian desire to see quick action. The offer would come with an unchanged message that Washington would veto the Palestinian bid at the Security Council for U.N. recognition and membership, but at the very least it would represent a dignity-saving compromise for Abbas’ U.S.-backed government.

By already promising a veto in the Security Council, the U.S. has blocked that course for the Palestinians before they even submit the request.

Alternatively, the Palestinians could seek the approval of a majority of the General Assembly’s 193 member states to upgrade their status from a permanent observer to a non-member observer state – a designation that would leave them with a symbolic victory despite years of failed negotiations and waning hopes for statehood.

In either scenario, the Palestinians will have shown they have the power to force action on the issue at a time when Israel is feeling increasingly isolated in the region.

Israel’s relations with regional allies Turkey, Egypt and Jordan have soured, while resentment against the Jewish state is on the upswing in the midst of a wave of revolts and uprisings in the Arab world. Those revolutions have led to the ouster of the long-time leaders of Tunisia, Egypt and Libya.

Israel’s embassy in Cairo was stormed by protesters last week – an incident that severely strained relations between the two neighbors who signed a peace treaty more than three decades ago.

Reflecting the extreme volatility of Mideast politics and the heat being generated by the Palestinian bid for statehood, a senior U.S. official said Clinton met with her Turkish counterpart and “encouraged” him to repair ties with Israel. She sought a positive role by Ankara in resolving the Palestinian issue that was “looming large” over the General Assembly that opens on Wednesday.

The official spoke on condition of anonymity because Clinton’s meetings were private.

For Washington, the Palestinians’ push also reflected a potential challenge to perceptions of the U.S. in the Mideast. The uprisings in the region have stoked increasing discomfort with the U.S. by the Arab masses, despite Washington’s support for the uprisings in Egypt and Libya and its condemnation of the brutal crackdowns in Syria and Yemen.