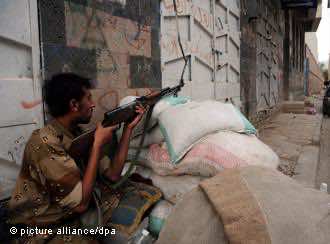 There are more and more attacks on protestors by the government of Yemeni President Ali Abudullah Saleh. But those who know the country say military action as seen in Libya is not an option for the West.

Reports coming out of the Yemeni capital Sanaa on Tuesday were full of grisly details of the recent rocket attacks on anti-government protestors, in which some 50 people were killed.

The popular uprising against the Saleh government, in what has been described as the most dangerous country in the world, has been going on since February. But although Saleh, who was seriously wounded in an assassination attempt this summer, nominally agreed to step down, he has shown few signs of actually doing so, and the conflict is growing increasingly violent.

With that in mind, some observers are questioning whether the West might not have a moral duty to intervene militarily, as it did in Libya to protect anti-Gadhafi rebels. However that, say experts, is a very bad idea.

Thomas Wandinger, the head of the IAP division at the Institute for Politics and International Studies, a Munich think-tank, explains.

Al Qaeda is known to be operating in Yemen, and the country’s location alongside the key shipping route to the Middle East and parts of Northern Africa make it of crucial geopolitical importance. For that reason, the United States has been carrying out limited air warfare, largely using unmanned drones, against alleged terrorist targets.

But does the West need to step up the pressure of force, for either humanitarian reasons or reasons of national interest?

The role played by Western military force in the removal of Libyan dictator offers a tempting template for how to deal with the growing instability in Yemen. But experts say the temptation should be resisted.

“There’s a clear difference between Yemen and Libya,” Birringer said. “In Libya a specific reaction was the only thing that could have averted an imminent catastrophe. In Yemen, there is fighting between the most diverse varieties of groups. The situation changes almost on an hourly basis.”

Wandinger concurs with that assessment.

“It would be impossible for the West to launch a campaign against forces on all four conflict levels,” Wandinger said. “There’s no identifiable exit strategy. At most the West can try to enforce the containment of al Qaeda.”

Realistic as such assessment may be, they are of little consolation to those who lost their lives or were injured in Sanaa over the weekend. So what should the West be doing?

In late April, under pressure from the Gulf Cooperation Council, a union of six states on the Arabian Peninsula convinced Saleh to agree to step down. And experts say the West’s best strategy right now is to try to get Saleh, who has been recuperating in Saudi Arabia since the assassination attempt, to honor that agreement.

“It would be good if the West could get President Saleh to accept the suggestions of the mediators and finally and clearly step down,” Birringer said. “Moreover, Yemen would benefit from concrete assurances of support for the case that the different groups reach an agreement and work toward stability. That would give ordinary Yemenis a positive perspective.”

Pressing ahead with the existing course may be frustrating, says Wandinger, but it is the best way of balancing the many considerations at play with the Yemeni uprising.

“The West’s responsibility to protect innocent civilians exists in a moral sense, but not under the terms of international law,” Wandinger argued. “What we should do is offer humanitarian help aimed at trying to achieve a general ceasefire and support for consensus building among the competing factions.”

The various popular uprisings associated with the Arab Spring have confronted the West with a variety of unforeseen scenarios and ethical and political dilemmas. They have also shown that each society in the region is individual and requires a tailor-made approach to resolving conflict and establishing stability.

For that reason, say experts, there is no blanket solution or strategy. Despite what may be the desire of many in the West to rid Yemen of Saleh in one fell swoop, a slower approach may be needed to negotiate a multi-faceted conflict in a strategically crucial area of the world.