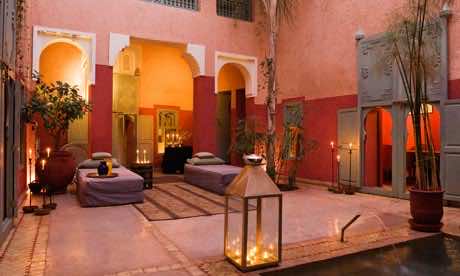 The cleansing effect on the skin of the ancestral hammam ritual rivals any modern beauty treatment.

It’s the middle of August in the month of Ramadan in Rabat – mercifully shielded from the harsh temperatures that affect most of the country – and my daughter and I have an appointment with Sama’ and her daughter to go to the hammam.

I appear in my jellaba, a loose-fitting robe, and purple scarf (fruit of another expedition to the souk) with a grey rucksack and green money pouch that Sama’ eyes disapprovingly as she slings her own green satin bag over her colour-co-ordinated jellaba and hijab. She carries a large blue bucket. We cross the road bustling with people, cars and the newly installed tram, slither through a diminutive Almohad arch that pierces the medina quarter’s ochre walls and disappear into the bowels of sinuous streets teeming with shoppers.

Near the shop selling unbaked tagines we take a right into a lime-washed alley painted in a rainbow of pastel shades and enter an unassuming open door where we are greeted. As we start taking off our clothes, a large woman past her prime comes out and proceeds to lean against the wall as another semi-clad woman scrubs her back. Once I take my glasses off everything is pretty much a blur.

In the warm steam room, women fill buckets with water from a gushing tap on the wall, sit on plastic mats and the washing begins: splash yourself with copious amounts of water, soap, then more sloshing. At this point the tayaba is summoned, topless with a scarf wrapped around her head. She takes my arm and starts to scrub it. By the time I’m lying on the floor, I start to relax and enjoy this intimate experience with a complete stranger.

She turns to my daughter, who protests about her delicate skin. But then her body unwinds and cedes to the strong, methodical movement of the scrubber removing layer upon layer of dead skin and leaving a distinctly polished feeling, especially after a final gush of hot water.

No amount of creams and gels can compete with the “total exfoliation” effect of this simple, ancestral ritual. All wrapped up, we trudge home and Sama’ comments that the hammam and Ramadan do not make a happy combination: hunger and thirst are magnified and any trace of energy dissipates. Clean and contented we both drop off to sleep while the girls brush each other’s hair.