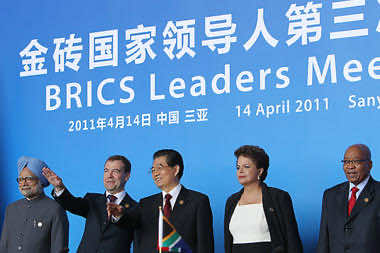 It’s high time the so-called BRIC states – Brazil, Russia, India and China – confront the Syrian regime, if they want to be seen as global players with a growing influence, writes Alvaro de Vasconcelos.

The brutal repression unleashed by Bashar al-Assad’s regime against the peaceful demonstrators in Syria has reached levels that can no longer be tolerated by the international community.

The violent crackdown, including the torture and murder of arrested citizens, clearly amounts to a crime against humanity. It is imperative that the international community acts before it is too late. The principle of the Responsibility to Protect should be immediately invoked.

It is worth remembering that the principle approved by the General Assembly of the UN states that “each individual State has the responsibility to protect its populations from genocide, war crimes, ethnic cleansing and crimes against humanity.”

Syria is of course responsible first and foremost for the application of this principle. However, as it has consistently refused to exercise this responsibility, or any kind of restraint, it is now up to the members of the Security Council not only to condemn the repression in the strongest terms but also to take “timely and decisive” proactive action to stop Assad from killing his own citizens.

This is the responsibility not only of the US and of European countries but of the other permanent members of the Security Council, Russia and China, and also of non-permanent members like Brazil or India.

The BRICs should care about Syria and bear their share of responsibility. No state can aspire to great power status without acknowledging the importance of the Middle East on the international foreign policy agenda. This is true for China, which is the main importer of oil from and the primary exporter of goods to the region, but also for India, 70 percent of whose oil exports come from the region. Furthermore, the region is home to around five million Indian migrants.

For Russia the stakes have to do with its strategic ambitions. Under Prime Minister Putin, Russia has developed close energy and military ties with Syria, including building a military naval base that should be operational in 2012. At the same time Russia has been able to maintain good relations with Israel, even if these were disrupted by the Georgia war in 2008, and be a member of the Middle East peace Quartet.

In the case of Brazil, a large proportion of its population is of Syrian origin. This enhanced the significance of President Lula da Silva’s visit in 2003, the first one he paid to an Arab country, which was followed by an Arab-South American Summit in 2005. Brazil’s credentials in the realm of mediation are well known, but even the most “neutral” actor in international relations must stand up for innocent victims.

The BRICs’ attitude of non-interventionism and of prioritizing their relations with the government in place regardless of that government’s actions is coherent with their traditional posture.

This stance has not been very different from that of most European states or of the US in the past, except that they have been, to different degrees, much more reluctant to support the Arab democratic wave.

The weak point of such a policy is that the governments and regimes they have traditionally dealt with have lost or are fast losing power and their future interlocutors will be those who are now being repressed. The latter will naturally remember those who supported them in their struggle for freedom and those who have failed to protect them from mass murder. We have seen how some states have managed to regain the goodwill of the Libyan people despite having previously lent support to the Gadhafi regime.

Drawing on the goodwill and support of the BRICs countries should be the priority of the European Union, involving both EU institutions and EU Member States. It is not going to be an easy task, though, since the BRICs generally consider that NATO’s military intervention in Libya has set a bad precedent. They have, however, criticized the way in which the intervention was implemented rather than the principle itself.

In Russia, politicians are playing the nationalist card with a view to the upcoming presidential elections and want to show their opposition to Western “activism.” In India it is difficult to find support for the intervention in Libya, apart from in some intellectual circles.

In China a debate is taking place between those who believe that China should support the revolution that has swept the Arab world and those who negatively view the wave of uprisings as “turmoil” and fear its potential contagion effects in China itself.

In Brazil, the dilemma is how to balance concerns about military action beyond peacekeeping with Brazil’s new responsibilities as a global player anxious to be seen as a beacon of democracy and supporter of human rights. In this context, implementing the Responsibility to Protect has been recognised as a fundamental component of the protection of human rights, as affirmed by the Brazilian Foreign Minister António Patriota in a recent article.

It is clear that the BRICs  are not prepared to support another resolution that would allow for recourse to “all necessary means … to protect civilians and civilian populated areas under threat of attack,” as happened in the case of Libya. But this is not currently being proposed by anyone considering that the circumstances on the ground are different in each of the two cases.

What is necessary is to cease all cooperation with Assad, isolate him, show that he has lost all international support and approve a UN Security Council Resolution to impose international sanctions on his regime.

Many demonstrators in Syria are preparing to arm themselves to protect their lives. They feel inspired by the revolution in Libya. If they do take up arms the human consequences may be extremely serious as the regime is clearly prepared to resort to mass murder to remain in power.

It is also difficult to predict the regional impact of a civil war in Syria that is likely to see a split between the special forces loyal to the Assad regime and sections of the marginalized regular army. It is clearly in the interest of the international community that a peaceful solution is found, but for this the killing of civilians must stop. The BRICs have an enormous responsibility to help ensure that this happens.

Álvaro de Vasconcelos is the director of the EU Institute for Security Studies (EUISS) in Paris.