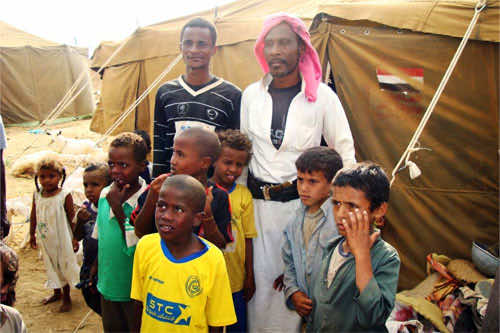 Yemen remains on the verge of a humanitarian disaster, with rates of malnutrition that are among the highest in the world especially among children in communities displaced by conflict across the country, the United Nations Children’s Fund (UNICEF) reported today.“Vaccination programs are under threat, as electricity and gas shortages compromise the viability of vaccines, especially in rural areas,” said Marixie Mercado, UNICEF spokesperson in Geneva.

“The likelihood of outbreaks of deadly diseases such as measles increases by the day,” she said, quoting from a UNICEF statement delivered to the UN Human Rights Council during a session on Yemen yesterday.

Ms. Mercado said children have lost almost two months’ worth of schooling because of the civil strife in a country that was already struggling to offer basic education to two thirds of its children.

“UNICEF calls upon all partners to prevent this humanitarian disaster from happening,” she said.

The agency and its partners also confirmed that four children had been killed and 18 injured by live ammunition in the latest round of violence in Yemen on Sunday and yesterday.

Yemen has been in the maelstrom of violent upheaval since February when unrest spread across the Arab world with people rising up to demand greater civil liberties and democratic governance. The Government responded with a violent crackdown on demonstrations.

Secretary-General Ban Ki-moon yesterday strongly condemned the “excessive use of force” by Yemeni Government security forces against unarmed protesters that has resulted in scores of deaths and many injuries over the past couple of days.

Mr. Ban called on Yemeni authorities to protect civilians and uphold their obligations under international law amid the escalating unrest between security forces and protesters seeking to oust President Ali Abdullah Saleh.