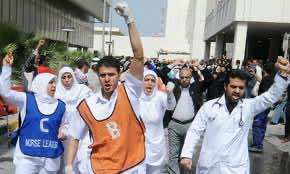 A spokesperson for Bahrain’s government has denied claims of questionable trial practices in the cases of 20 medical professionals who were sentenced to prison for alleged involvement in the Gulf kingdom’s uprising in March.

Sentences for the medics were upheld on Thursday by a military court that charged them with stockpiling weapons and plotting to overthrow the government.

The medical workers and their advocates have said the charges are fabricated. Theyclaim their confessions were forced after being tortured by interrogators, and that they never had the chance to speak to lawyers before trial.

“We are credible witnesses for what has happened, and that’s why [we were convicted],” Ali Al Ekri, an orthopedic surgeon sentenced to 15 years in jail, told Al Jazeera.

“It’s crazy. Fifteen years for what? What did I do? I did only the right thing,” Dhaif said, referring to her treatment of injured protesters.

But Abdul Aziz Bin Mubarak al Khalifa, a senior counselor at the Information Affairs Authority in Bahrain, said the doctors were fabricating their description of events.

“I have another side of the story to tell,” he told Al Jazeera. “This has nothing to do with treating the protesters. [The medics were] collaborating with the hard liners… to overthrow the regime.

“This is an attempted coup d’etat.”

Al Khalifa said that he has “full faith” in the Bahraini appeals process, which will go through civilian courts and a high commission to assure the original trial’s accuracy.

“We had to video tape it [forced confessions] for Bahrain TV,” said Nada Dhaif, a dentist who was sentenced to 15 years in prison. “We were forced to say it for the camera. We were threatened, blackmailed.”

Fatima Haji, a rheumatologist who was sentenced to five years in jail, said that her treatment on her initial arrest amounted to “torture”. She said interrogators told her they treated her poorly because an image of her crying was aired on Al Jazeera.

“I was a human being. I was a doctor. I was doing my duty as a professional,” Haji said. “What we did is our duty as doctors, human beings, mothers. If I knew this would sentence me to life… I would still do it, again and again and again.”

Haji told Al Jazeera the public prominence of the medical professionals made them targets.

“We were basically the main witnesses and we had the highest credibility internationally [to speak] about what was really happening,” she said.

The doctors’ trial has been criticised by rights groups for Bahrain’s use of the security court, which has military prosecutors and both civilian and military judges, to prosecute civilians.

The UN human rights office questioned the fairness of the Bahrain court that sentenced the medics.

Bahrain’s National Safety Court, which is run by the military, reportedly gave defendants and their lawyers little time to prepare, failed to investigate allegations of torture and conducted some trials in just 10 minutes, said a spokesperson for the UN High Commissioner for Human Rights.

On Friday, Ban Ki-moon, the United Nation’s secretary-general, strongly criticised the medics’ “harsh” prison sentences, and expressed “his deep concern over the harsh sentences handed down in Bahrain to civilians, medical professionals, teachers and others, by the Court of National Safety,” said UN spokesperson Martin Nesirky on Friday.

“These proceedings were conducted under conditions that raised serious questions of due process irregularities.”

The four sentenced doctors who spoke to Al Jazeera said that they had not been presented any evidence of their guilt, either in prison or in trial.