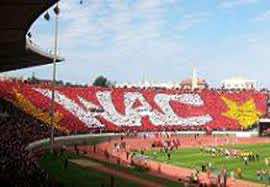 Nigeria’s Enyimba will seek to remain unbeaten in a dozen Champions League matches when they tackle Wydad Casablanca of Morocco in a semifinal first leg match on Saturday.

Enyimba have not lost since the 2008 semifinal against Al Ahly of Egypt in Cairo and they would very much wish to extend this marvellous run in Africa’s most prestigious club competition.

The two-time African champions will be paying their second visit to the coastal city of Casablanca after they held another Moroccan side Raja to a scoreless draw in a group game in August.

Last weekend, ‘The People’s Elephant’ were upset by Eastern Nigerian rivals Heartland in the country’s cup.

But club chairman Felix Anyansi-Agwu has issued a fighting talk to pull the team out of this disappointment as they aim for a third Champions League title this year.

“We have four more games in the Caf Champions League to emerge winners, but if we do not fight, we will crash out, just like we did against Heartland,” warned Anyansi.

“We cannot afford to be complacent, we cannot think that we are unbeatable.

“This defeat (vs Heartland in the Nigeria Federation Cup final) has opened the players’ eyes to the fact that if you don’t fight, if you do not give 110 per cent effort, you won’t win a match.”

The experienced club boss added: “Let this match be a lesson to every one of the dangers of complacency, but it us use it as a turning point to our success in other competitions.”

Anyansi said the team paid the price for being “too relaxed” against regional rivals Heartland, but at the same time he said he believes this defeat will be a big test of character for them.

Coach Okey Emordi is expected to keep faith with goalkeeper Paul Godwin even though it was his mistake that led to the cup winner just before half time.

Godwin has proved a capable replacement for first-choice Chijoke Ejiogu, posting five-star displays in the Champions League and will now be expected put behind him the painful cup loss.

Strikers Junior Osagie and Victor Barnabas, who has yet to recover from injuries in a toad accident, will not be available for selection.

However, Markson Ojobo, who has formed a superb central defence partnership with Chinedu Udoji, is eligible for this encounter after he served out a one-match ban for picking a second booking in Sudan against Al Hilal.

Right winger Philip Auta, who was sensationally not listed on the cup final squad, is equally expected to play a big role inside the Mohamed V Stadium in Casablanca Saturday night.

His trickery on the right wing would come in handy for the Nigerian champions especially away from home.

Wydad have already accounted for a Nigerian club in this year’s competition after they eliminated Kano Pillars in the Round of 32.

Wydad won 2-0 in the first leg before they held Pillars to a goalless draw in the return leg game.

They have maintained a great run except for their last group game away at bottom club MC Alger if Algeria, where they fell 3-1.

It was their biggest loss in the campaign thus far.