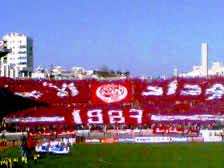 Nigerian champions, Enyimba were beaten for the first time in this year’s edition of the Caf Champions League.

The defeat came in the first leg of the Caf Champions League semifinal against Wydad Athletic Club of Morocco at the Complexe Mohamed V in Casablanca.

The Peoples Elephant went down to a late goal scored by Jean Louis Pascal Angan.

Okey Emordi’s men set off in the game on the back foot with Wydad pulling all the strings.

For the duration of 90 minutes, the game looked like a one-sided boxing bout with Enyimba receiving all sorts of blows from their hosts.

On 16 minutes Wydad thought they had taken the lead but the referee had whistled for an infringement.

Enyimba’s Paul Godwin was the busier of the two goalkeepers, as he was forced to make a double save at some point in the game.

The best chance of the Nigerians in the first half came on 25 minutes when Peter Onoja’s shot from 25 yards went past WAC’s goal by inches.

The restart witnessed the Peoples Elephant adopting a totally defensive approach leaving their top scorer in the competition, Uche Kalu as the lone man upfront.

On the 81st minute, defender Markson Ojobo scooped the effort of Ondama away with his thigh after Godwin was beaten to save Enyimba the blushes, as Wydad turned on the heat.

And as at the 83rd minute, if the number of corner kicks won games, Wydad would have been 14-0 up against a defensive Enyimba.

However, on 88 minutes, Wydad broke Enyimba’s resistance when Pascal Angan nodded the ball at the back post into the net off a free kick to give the home team a 1-0 lead.

Pascal Angan’s goal turned out to be the winner for Wydad, as Enyimba suffered their first loss in 12 Caf Champions League games this year.