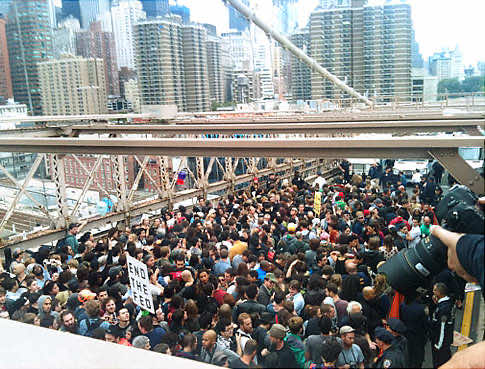 Police reopened the Brooklyn Bridge on Saturday evening after more than 500 anti-Wall Street protesters were arrested for blocking traffic lanes and attempting an unauthorized march across the span.

The arrests took place when a large group of marchers, participating in a second week of protests by the Occupy Wall Street movement, broke off from others on the bridge’s pedestrian walkway and headed across the Brooklyn-bound lanes.

“More than 500 were arrested on the Brooklyn Bridge late this afternoon after multiple warnings by police were given to protesters to stay on the pedestrian walkway,” a police spokesman said.

“Some complied and took the walkway without being arrested. Others locked arms and proceeded on the Brooklyn-bound vehicular roadway and were arrested,” he added.

The bridge was reopened at 8:05 p.m. EDT after being closed for hours.

Witnesses described a chaotic scene on the famous suspension bridge as a sea of police officers surrounded the protesters using orange mesh netting.

Some protesters tried to get away as officers started handcuffing members of the group. Dozens of protesters were seen handcuffed and sitting on the span as three buses were called in to take them away, witnesses and organizers said.

The march started about 3:30 p.m. EDT from the protesters’ camp in Zuccotti Park in downtown Manhattan near the former World Trade Center. Members of the group have vowed to stay at the park through the winter.

In addition to what they view as excessive force and unfair treatment of minorities, including Muslims, the movement is also protesting against home foreclosures, high unemployment and the 2008 bailouts.

Filmmaker Michael Moore and actress Susan Sarandon have stopped by the protesters’ camp, which is plastered with posters with anti-Wall Street slogans and has a kitchen and library, to offer their support.

On Friday evening, more than 1,000 demonstrators, including representatives of labor organizations, held a peaceful march to police headquarters a few blocks north of City Hall to protest what they said was a heavy-handed police response the previous week. No arrests were reported.

A week ago, police arrested about 80 members of Occupy Wall Street near the Union Square shopping district as the marchers swarmed onto oncoming traffic.

A police commander doused a handful of women with pepper spray in an incident captured on video and spread via the Internet, galvanizing the loosely organized protest movement.

The group has gained support among some union members. The United Federation of Teachers and the Transport Workers Union Local 100, which has 38,000 members, are among those pledging solidarity.

The unions could provide important organizational and financial support for the largely leaderless movement.

Similar protests are sprouting in other cities, including Boston, Chicago and San Francisco.