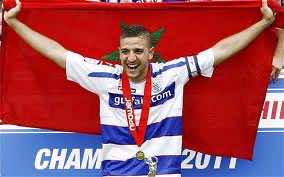 Adel Taarabt has been recalled to Morocco’s squad three months after he walked out on the team and vowed never to play international football again.

The French-born Queen’s Park Rangers midfielder is part of a 24-man squad named by coach Eric Gerets for the decisive African Nations Cup qualifier against Tanzania in Marrakesh next Saturday.

Taarabt, whose reputation for histrionics often matches his individualistic skills, walked out on the team after being named as a substitute for June’s qualifier in Marrakesh when Morocco beat neighbors Algeria 4-0.

At the time he said he ever never wanted to play international football again, “with or without Eric Gerets.”

But the Belgian-born coach says Taarabt should be given a second chance.

“I do not want to kill off the international career of a 22-year-old. When I was young, I also made mistakes,” Gerets told the magazine ‘France Football.’

Taarabt had apologized for storming out of the camp just days after the incident, but was still left out for two subsequent internationals before this recall.

Arsenal striker Marouane Chamakh returns after serving a one-match suspension in the Nations Cup preliminaries for an accumulation of yellow cards.