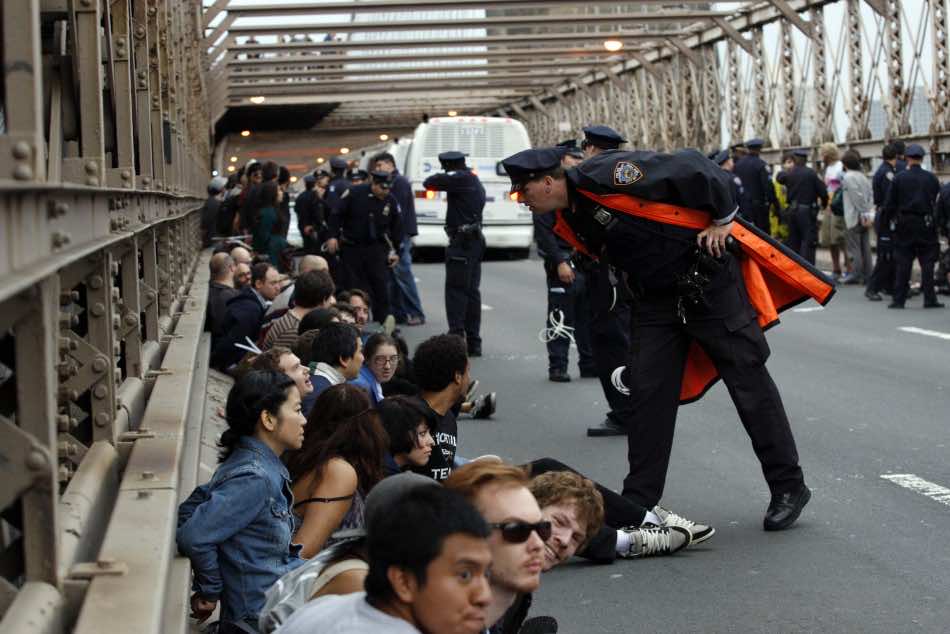 New York City police say they have arrested about 700 protesters after they swarmed onto Brooklyn Bridge and shut down a lane of traffic for several hours.

Police said some of the demonstrators, who were taking part in anti-Wall Street protests targeting the financial industry, spilled onto the roadway Saturday night after being told to stay on the pedestrian pathway.

“Over 700 summonses and desk appearance tickets have been issued in connection with a demonstration on the Brooklyn Bridge late this afternoon after multiple warnings by police were given to protesters to stay on the pedestrian walkway, and that if they took the roadway they would be arrested,” said a police spokesman.

“Some complied and took the walkway without being arrested. Others proceeded on the Brooklyn-bound vehicular roadway and were.”

Officers cut the marchers off, plunged into the crowd, and began making arrests as marchers chanted, “Shame! Shame!”

Witnesses described a chaotic scene on the famous suspension bridge as police officers surrounded the demonstrators in orange mesh netting.

Some protesters tried to get away as officers started handcuffing marchers.

Members of the “Occupy Wall Street” movement have vowed to stay through winter in a park near New York’s iconic financial district, where they are protesting issues including the 2008 bank bailouts, foreclosures and high unemployment in the United States.

The group has been camped there for two weeks and clashed with police on earlier occasions.

Earlier on Saturday, two marches went over the bridge without problems; one was from Brooklyn to Manhattan by a group opposed to genetically modified food and another in the opposite direction marched against poverty.

Protests inspired by New York have emerged in other US cities in recent days, including Chicago, San Francisco and Los Angeles.

A group in Boston has adopted the tactics of New York’s protesters and on Friday night set itself up in the city’s Dewey Square. Activists remained camped out at what they called “the heart of the financial district” on Saturday.

“We are establishing our subsection of a national dialogue on finance reform and governance reform,” Nadeem Mazen, an organiser with Occupy Boston, told Al Jazeera.

Mazen said that the Boston protest quickly drew a thousand people. “It shows that we’re experienced and that we’ve all been independently thinking about what change we want to see… I think we’re all very hungry for change.”

The New York campaign is based in Zuccotti Park – formerly Liberty Plaza Park – just across from the World Trade Center site.

The movement has gained the support of five New York labour unions, as well as celebrities and academics such as Susan Sarandon, Michael Moore, Noam Chomsky, Cornel West, rapper Lupe Fiasco and the British band Radiohead.

More than 1,000 demonstrators marched on Friday to New York’s police headquarters to protest over what they viewed as a heavy-handed police response earlier in their demonstration.

Some held banners criticising police, while others chanted: “We are the 99 per cent” and “The banks got bailed out, we got sold out”.

Police observed Friday’s march and kept protesters on the sidewalk, but no clashes or arrests were reported.

“No to the NYPD crackdown on Wall Street protesters,” organisers had said on their website, promoting the march.

Other online flyers for the march critiqued local police policies: “No to Stop-and-Frisk in Black & Latino neighbourhoods” and “No to Spying and Harassment of Muslim Communities”.

The protest came less than a week after police arrested 80 Occupy Wall Street members during a march toward a main shopping district – the most arrests by New York police at a demonstration since hundreds were detained outside the Republican National Convention (RNC) in 2004.

A city police commander used pepper spray on four women at last weekend’s march and a video of the incident subsequently went viral on the internet, angering many protesters who vowed to continue their protests indefinitely.

The same commander was accused of false arrests and civil rights violations after incidents with protesters during the 2004 RNC police response.