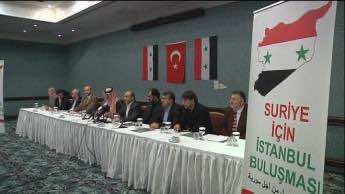 The Syrian opposition grouped all of its political factions abroad under one roof when it announced on Sunday the formation of the National Unity Council during a press conference held in Istanbul.

The Paris-based Burhan Ghilyon, who is a sociology professor at Sorbonne and considered to be one of the main opposition figures abroad, announced the formation of the council in Turkey after meetings there.

“The Syrian Council is open to all Syrians. It is an independent group personifying the sovereignty of the Syrian people in their struggle for liberty,” Ghilyon said.

Ghilyon was also designated as leader of the National Unity Council.

While the newly formed council united all of the opposition outside the country, its officials said that it is open to opposition in Syria joining it. They added that they were not in favor of dismantling the Syrian army.

The council rejected foreign intervention but asked for U.N. articles that would protect civilians in the country. It has also vowed to push for the creation of a democratically elected civilian state and to fulfill the aspiration and goals of the Syrian revolution, which began six months ago.

Ghilyon said that peaceful means are the only solutions to the conflict in Syria, and that peaceful protests will continue until the toppling of the Syrian regime.

One of the opposition figures in the conference said Syrian was a progressive nation not tainted by sectarianism and that their council includes all of Syria’s different factions, including Kurds, Assyrians, liberals and the Muslim Brotherhood.

When asked about the structure of the council, Basma Qadhmani, one of the council’s members, that the conference is political in nature and that details will be made public at a later day.

But Qadhamni said that the council includes a general assembly, general secretariat, and an executive committee.

Forming a united front abroad is a milestone for Syria’s opposition, because critics have criticized its disunity, making it difficult for the movement to attract adherents.