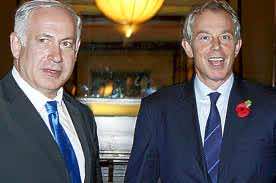 Unofficial suggestions that Blair should now be replaced coincide with a Palestinian drive to secure membership of the United Nations, establishing statehood in the face of strong opposition from Israel and its main backer, the United States.

While there has been no official request to the Quartet of Middle East peace mediators to have Blair removed as their envoy, some Palestinian officials at the weekend told reporters they had had enough of what they perceive to be his pro-Israel bias.

Bassam al-Salhe, a Palestine Liberation Organisation (PLO) official who attends the PLO’s high-level meetings, described Blair on Sunday as “a junior employee of the Israeli government” rather than a neutral envoy of the foursome made up of the European Union, the United States, U.N. and Russia.

He spoke of a growing tendency in the Palestinian leadership to boycott Blair after he “lost his credibility.”

Israel said on Sunday it accepted a Quartet proposal for a resumption of peace talks within a month. The Palestinians reaffirmed there could be no negotiations until Israel halts all settlement activity in the occupied West Bank.

Palestinian chief negotiator Saab Erekat, however, said there had been no official move to boycott Blair or to lodge a request for his replacement.

A spokesman for Blair said diplomatic work was continuing as usual and he was unaware of any formal complaints about the envoy’s work. Blair has represented the Quartet since 2007.

“From the calls Tony Blair has been doing with senior Palestinians in the last few days it has been business as usual,” Blair’s spokesman said.

“Our focus is on … a return to direct talks between the parties. It is the job of the Quartet representative to interact with both sides.”

The Quartet, established in 2002, has played a role supportive of but secondary to that of Washington in efforts to mediate a negotiated resolution of the 63-year-old conflict.

But Palestinian commentators last week said America’s vaunted position as “honest broker” in the conflict had been exposed as a sham when President Barack Obama warned Abbas against trying to take “shortcuts” to statehood.

The Palestinians say they have been patient during 18 years of futile talks, in which time Israel has simply continued to build settlements on land they want for a Palestinian state while the major powers did nothing to prevent it.

Salhe said: “Tony Blair has become an unwelcome person. He has no credibility and he is making the Quartet weaker than it already is.”

“Blair has violated the nature of his job which requires him to be neutral. He is not neutral,” the PLO official added.

“There is no one among the leadership who does not question Blair’s credibility,” he told Reuters in Gaza by telephone.

in Ramallah, had nothing to say on Blair.

“We thought (Blair) would really enrich that position and would be a real support to the Palestinians,” he said. But as time went by Blair’s role had shrunk to “asking the Israelis to remove a (West Bank) barrier here or there.”

“He just avoided all the political requirements of his job as representative of the Quartet,” the aide to President Mahmoud Abbas added. He ended up supporting “that horrible resolution of the Quartet, parroting what the Israelis wanted.”

“Lately … he talks like an Israeli diplomat. His main worry is not to anger the Israelis, therefore he’s just selling their programs, their projects, and if he does that then his usefulness will be limited to us.”

But a top Palestinian official speaking off the record said there was “an extreme dissatisfaction among Palestinian leaders with Blair. There is a huge criticism to his policies.”

“Blair never agreed to anything unless the Israelis were happy with it,” the official said, on condition of anonymity.