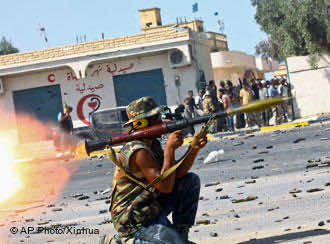 The battle for deposed Libyan leader Moammar Gadhafi’s hometown of Sirte has intensified, at the cost of the city’s struggling hospitals. Hundreds of people are fleeing the city.

The Red Cross warned on Sunday of a medical emergency in the Libyan city of Sirte, as hundreds of civilians fled Moammar Gadhafi’s hometown amid heavy fire.

Libya’s interim government, the National Transitional Council (NTC), declared a two-day ceasefire to allow civilians to flee the Gadhafi stronghold, but people emerging from the city said they had not heard of the truce and that the shooting had continued.

Gadhafi’s native city is one of two towns still holding out against rebel fighters. The siege on Sirte is now in its third week.

Fighting continued as a Red Cross team delivered supplies to medics in the coastal city on Saturday, with the city’s hospital coming under fire as the new regime’s forces intensified their push to take Sirte.

Staff at the Ibn Sina hospital told the team that “because of lack of oxygen and fuel for the generator, people are dying.”

“Several rockets landed within the hospital buildings while we were there,” Khadhraoui added. “We saw a lot of indiscriminate fire.”

During the ICRC’s visit, NTC fighters launched a rocket and cannon attack from a position less than a kilometer away from the hospital.

The ICRC had been trying to enter Sirte for weeks. At a field hospital near the eastern front line, ICRC spokeswoman Dibeh Fakhr said there was “no medical equipment, medicines or oxygen” available at the hospital.

“A lot of citizens have fled the city. We have no information how many exactly… but hundreds of families, which means thousands of people, are still in there,” Fakhr said.

Doctors at a field hospital east of Sirte said four NTC fighters were killed on Sunday in “friendly fire” incidents.

Moussa Ibrahim, the fugitive spokesman for Moammar Gadhafi and a Sirte native, telephoned a Syria-based television channel late on Saturday.

“Tomorrow we expect a strong attack from several points of Sirte but we are ready,” Ibrahim said.

Gadhafi, whose whereabouts remain unknown, is the subject of an international arrest warrant. He has been abandoned by nearly all of his allies abroad, with one exception being Venezuelan President Hugo Chavez, who said Saturday that Gadhafi was in his prayers.

“The Libyans are resisting the invasion and aggression,” Chavez said. “I ask God to protect the life of our brother Muammar Gaddafi. They’re hunting him down to kill him.”

“No one knows where Gaddafi is, I think he went off to the desert … to lead the resistance,” he added. “What else can he do?”