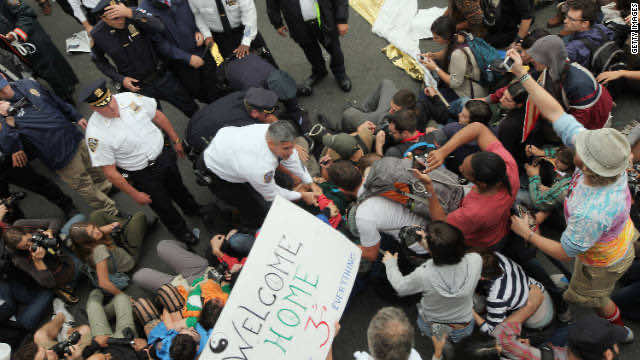 New York  — A spirited and leaderless protest in the Wall Street section of New York has entered its third week, helping to inspire a growing number of demonstrations united in their passion if not necessarily their reasons for hitting the streets.

The hub of the movement, in Lower Manhattan, was abuzz with activity on Sunday as activists continued to vent their frustrations with everything from “corporate greed” to high gas prices to insufficient health insurance.

No single group or person heads the effort, which has adopted the name “Occupy Wall Street.” While a “general assembly” is held daily for those gathered — be it for a few short hours or by camping out long-term — to discuss the goings-on and work toward a common mission, the stances being touted currently are diverse.

“We’ve gathered here in this place … to shape a statement of what it is we want, and how we’re going to get to it,” said Robert Segal, one of the New York protesters.

The lack of coherent message has not stopped similar efforts from popping up elsewhere in the United States.

“Occupy Chicago,” for instance, entered its 10th day on Sunday, a day after an associated website touted “a huge afternoon march.”

The motto atop a website for “Occupy Los Angeles,” which kicked off Saturday with a march from Pershing Square to City Hall, reads: “The revolution is happening … It’s just not in the news.”

There are 34 organizations — from unions to ethnic organizations to activist groups focused on everything from foreclosure prevention to climate change to justice-related issues — listed as being involved in a like-minded activist coalition in Boston. This group, which held a festival and march Friday and Saturday and has explicitly targeted Bank of America in recent weeks, states on its website that its aim is to “stop their greed,” “fight for an economy that works for all of us” and “build cities that are democratic, just and sustainable.”

The website of Seattle demonstrators describes the nationwide effort as “a leaderless resistance movement with people of many colors, genders and political persuasions.”

“The one thing we all have in common is that We Are The 99% that will no longer tolerate the greed and corruption of the 1%,” the statement continues, referring to what it sees as a sharp divide between the wealthiest Americans and the rest of society.

Most demonstrations thus far have been peaceful and uneventful, though in a few cases they have led to numerous arrests.

The most high-profile such incident came Saturday, when New York police arrested more than 700 protesters who had occupied the iconic Brooklyn Bridge. They were cited for blocking the roadway, authorities said, and eventually released after being given tickets.

The confrontation came as protesters along the road banged drums and chanted, “The whole world is watching” as police moved in.

Paul J. Browne, the deputy commissioner for the New York City Police Department, said they were given “multiple warnings” to stay on the pedestrian walkway and not the main roadway. The incident led to a shutdown of Manhattan-to-Brooklyn bridge traffic for several hours.

Demonstrators have said they take their inspiration from the Arab Spring protests that swept through Africa and the Middle East this year.

The protest campaign — which uses the hashtag #occupywallstreet on the microblogging site Twitter — began in July with the launch of a simple campaign website calling for a march and a sit-in at the New York Stock Exchange.

It has gained steam since early September, with crowds taking up residence in a park in New York’s financial district and calling for 20,000 people to flood the area for a “few months.” In recent weeks, the New York demonstrators have addressed various issues, including police brutality, union busting and the economy.