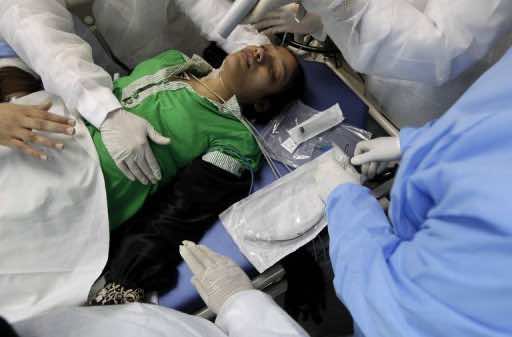 A group of Bahraini medics handed lengthy jail terms by a security court for trying to overthrow the regime will appeal their sentences in a civil court later this month, the prosecutor general has said.

“A session has been set for October 23 to look into the appeals,” chief prosecutor Abdulrahman al-Sayyed said in a statement carried overnight by the official BNA news agency.

The National Safety Court, specially created after a government crackdown on anti-regime protesters in March, had on Thursday sentenced 20 doctors, nurses and paramedics to jail terms of between five to 15 years.

The prosecutor did not specify how many of the convicted medics would lodge appeals in what are set to become the first cases in a civil court for Bahrainis accused of anti-government acts.

“The judgement in these cases is not final… all the defendants can appeal the court’s judgement,” said Sayyed, adding some medical officials who have not yet filed an appeal can still do so.

Since the March crackdown, several groups of defendants — doctors, activists, and opposition figures alike — have been tried in the quasi-military court.

Of the original 20 medics convicted, 13 were sentenced to 15 years in jail, two to 10 years behind bars and five to five years each for their roles in protests that swept the Gulf kingdom in February and March.

The medical staff all worked at the Salmaniya hospital in the capital Manama which was stormed by security forces in mid-March as forces drove protesters out of Pearl Square, the focal point of demonstrations.

International human rights groups, the United Nations and medical associations in the West condemned the sentences and have called for the rulings to be overturned.

Last month, King Hamad promised that all Bahrainis in trials related to protests would see their verdicts issued by a civil court.

The special court which convicted the medics was set up under a three-month quasi-emergency law imposed ahead of the crackdown on demonstrators. It is composed of both civilian and military judges.

Meanwhile, human rights activists said Monday that a group of 14 prominent Bahraini activists and opposition figures who launched a hunger strike on September 24 are being denied medical care while in prison.

Mohammad al-Maskati, head of the Bahrain Society for Human Rights, said that the health of at least two of the jailed activists on hunger strike had deteriorated.

“Abduljalil al-Singace and Abdulwahab Ali both have pre-existing medical conditions, including diabetes, and their health has deteriorated significantly,” Maskati told AFP.

Maskati said the prison administration in Bahrain where the hunger strikers are being held “have been refused access to doctors.”

“They were told that this was punishment for them going on hunger strike,” he said.

Singace and Ali are among seven prominent activists serving life sentences for their role in anti-government protests.

The remaining activists on hunger strike were sentenced to terms ranging from two to 15 years.