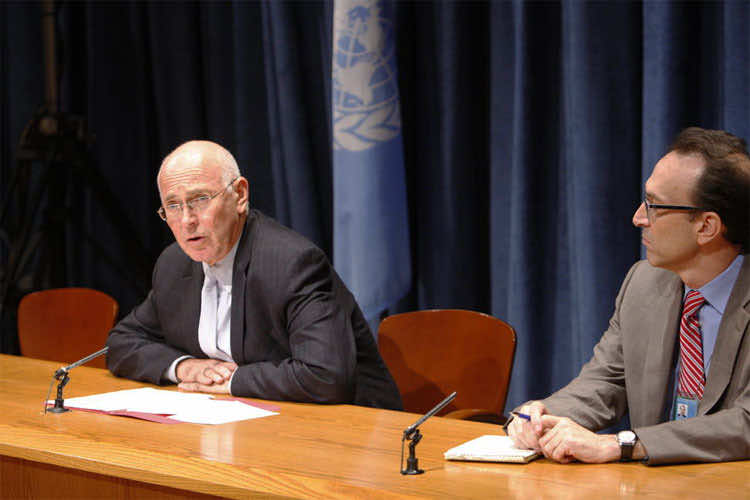 The head of the United Nations Support Mission in Libya (UNSMIL) yesterday visited war-ravaged Misrata, reporting widespread destruction in the city, paying his respects to those who lost their lives during the protracted fighting earlier this year and hailing the spirit of the people.

“I came to present my deepest respect to the people of Misrata for their heroic struggle and to convey my condolences to the families of martyrs and to the injured,” said Ian Martin, who is also the Secretary-General’s Special Representative for Libya.

“I have seen myself the evidence here of war crimes by the Qadhafi regime,” he said, referring to the now ousted government of Colonel Muammar al-Qadhafi, which battled armed opposition forces for months this year.

“And I have come to hear the expectations of the people of Misrata for the support of the UN, as we now help Libya build a democratic state based on respect for human rights and rule of law.”

Misrata experienced some of the heaviest fighting during the Libyan conflict as it was besieged by pro-Qadhafi forces for weeks, with supplies of running water and other basic amenities cut off. As many as 1,500 people were killed in the city, according to local council officials.

Visiting the city today, Mr. Martin found Tripoli Street, once a bustling central thoroughfare lined with residential and office blocks, shops and a major hospital, to be the scene of twisted metal, shattered concrete, and bullet holes in every building. The hospital was destroyed and then used for military purposes by forces loyal to Colonel Qadhafi.

The Special Representative was greeted by representatives of the forces who liberated Misrata and met with the local council and representatives from civil society, including women and youth. He briefed them on UNSMIL’s mandate, focusing on UN support in the security sector, elections, human rights and rule of law.

Discussions covered the reintegration and rehabilitation of fighters and the treatment of those traumatized by the violence. Other topics raised by residents included the need for training in leadership skills, transparency and accountability.

They also discussed the issues of transitional justice and reconciliation, internally displaced persons (IDPs) and the provision of medical care for the war wounded.

Mr. Martin’s deputy, Georg Charpentier, who is also the UN Resident Coordinator and Humanitarian Coordinator for Libya, is due to lead a joint assessment of the humanitarian needs in the Sirte area today.