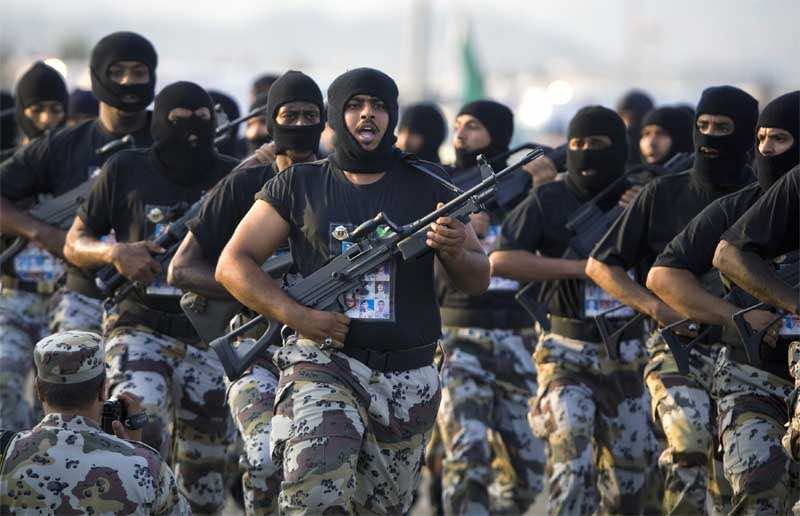 Amidst uprisings throughout the Middle East, Washington and Riyadh have quietly agreed to train a new force to fend off any potential revolt against the Saudi kingdom.

On 10 March 2011, Saudi security analyst, Nawaf Obaid, wrote an article in Foreign Policy that proclaimed, “There Will Be No Uprising in Saudi Arabia”. The article sparked discussion – not only because Obaid has been accused of being an “indefatigable Washington gadfly” who works to provoke specific outcomes in US-Saudi relations – but because he boldly predicted such an outcome in the midst of unprecedented upheaval in the region: Saudi Arabia has yet to witness any substantial internal uprising.

At the time of Obaid’s writing, the US was pulling back from its commitments to assist Saudi Arabia against external threats, particularly the mounting one vis-à-vis Iran. In fact, it was the Gulf Cooperation Council’s (GCC) military force that had to step forward in mid-March to quell a Shiite revolt inside Bahrain – one that was generally believed to have been supported by Iran. That GCC military force – a 40,000-strong army called the “Peninsula Shield” – had to be revived in response to the absence of US military action. In response, Obaid deemed the US “inadequate in defending [Saudi Arabia] against Iranian influence” and that it had “abandoned its regional allies”.

Saudis and the Persians could be described as maintaining a love-hate relationship, and with a Saddam-free Iraq – Iran’s only border-challenger – Saudi Arabia inevitably became the only other regional power that could counterbalance a growing Iranian hegemony. The US’ promotion of Saudi Arabia as the sole hegemon in the region is one of strategic necessity, based on a more than 60-year relationship with the leading OPEC oil producer.

By July – in the midst of the Arab Spring – Riyadh presented Washington with something of a false choice: fund the Saudi security infrastructure to help quell Iranian influence (which could occur directly or by proxy like in Bahrain), or do nothing and allow Iranian hegemony to grow, placing American interests in the Arabian peninsula in jeopardy. Unsurprisingly, Washington reacted by committing to a new US-Saudi arms deal containing “warships with integrated air and AEGIS missile defense systems, as well as helicopters, patrol craft and shore infrastructure” and a program to “train a new Facilities Security Force (FSF) designed to protect sensitive Saudi oil installations . . . to reach 35,000 strong.”

Essentially, the FSF was created out of fear by the Saudi elite, who watched with alarm as Iran influenced the Bahraini revolt. And the Saudis knew the US could not ignore growing Iranian influence in Saudi Arabia. The creation of an FSF does two things: it develops yet another defense against a potential attack from Iran, but it also defends Saudi elites from the population, which could be influenced by Iran or others.

According to Dr Ehsan Ahrari, an independent defense consultant, former professor at the US Air War College, Joint Forces Staff College of the National Defense University, and the Asia-Pacific Center for Security Studies, Honolulu:

The United States cannot afford a regime change in Saudi Arabia, which is the most important of all Arab countries for the US. Thus, [the US] is training FSF forces; [Washington] will sell them huge military packages …to keep [American] defense industries running. Even CENTCOM and AFRICOM will be involved in this deal for proper coordination.

Indeed, US funding of Saudi security forces is not new. Since 2007, US defense contractor giant Lockheed Martin has trained over 10,000 recruits for domestic security operations – exactly the type of personnel who would be used for an FSF. Excluding the supply of military hardware like missile defense systems and fighter jets, the Middle East Economic Survey estimated in 2007 that the scale of a recent US-Saudi arms deal was “so immense” that “several years are likely to elapse until the new force is fully capable [with a cost] likely to reach $5bn.”

The uprisings that swept across the Middle East, however, have started to bring the force into fruition.

“First and foremost, the beneficiaries [of the US-Saudi deal] are Saudi Arabia, the UAE and Bahrain from their endeavors to avert regime change. The next is the US government and [its] defense contractors, who are most worried about the disappearing defense dollars inside the US political arena due to budget shortfalls,” Ahrari told ISN Insights.

The US has continued to spend money on the Arabian Peninsula to assert its dominance in the region. In June 2011, the Associated Press reported that the creation of a secret CIA-controlled drone facility near Yemen was to be used “as a backstop, if al-Qaida or other anti-American rebel forces gain control.”

And US-Saudi security cooperation is moving forward on other fronts. On 3 August, OilPrice.com reported that a visit by Obama cabinet members to Saudi Arabia would be a “preliminary” step to “discuss the possibility of moving forward on a nuclear cooperation agreement.” Until this occurs, however, the king recognized that increasing security and granting some (perceived) marginal civil liberties to the country might be needed to protect the monarchy from jeopardy.

During the Bahraini uprising, the King handed out $91 billion to the population while boosting the number of police on the ground, in what Reuters correctly identified as “a mixture of carrot and stick to stave off unrest rocking the Arab world.” On 25 September, Abdullah announced that beginning in 2015, Saudi women would be able to vote and run in local elections. As such, Saudi Arabia seems to have found an arrangement that many other Arab states did not in recent months: by beefing up security forces and conceding a few civil liberties to the population, the dominant power structure can at least for a time remain intact with a popular uprising kept at bay.