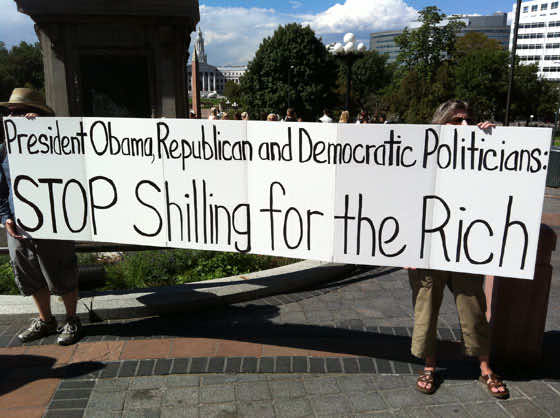 For months, many labor leaders including myself have supported worker actions in Wisconsin and Ohio and more recently the CWA strike here in New York, and contemplated what the future may hold for America’s workers. The recent walkout by Longshoremen in Washington and the ongoing “Occupy Wall Street” movement that is attracting a broad-base of supporters, including many labor organizations, demonstrates, worker dissatisfaction — both here and abroad is reaching a critical juncture .

The revolutions that have swept the Middle East — Tunisia, Libya, Egypt, Syria — are a strike against a group of monstrous tyrants — that much is indisputable. Yet the factors that led to the so-called Arab Spring uprisings were as much about economic inequality as lack of personal freedoms.

Many young Arabs have been deprived of the opportunity to make a respectable living as corrupt businessmen and government officials used their influence to become billionaires. To make matters worse, these governments provided very few social services to this growing class of disadvantaged citizens. Ultimately, as living conditions worsened and communication became easier, (Internet, cell phones, etc.) the revolutions took shape.

We are headed in the same direction in America. A recent census report shows that poverty rose to its highest level, 15 percent nationally, since 1993, and 16 percent in New York, leaving the middle class, which unions played a pivotal role in building, that much smaller. While our government is not as oppressive as those Middle Eastern regimes, economic inequality has been accelerating. The rich have become significantly richer while incomes for middle class families have shrunk against the cost of living. Now the top 1 percent of income earners control move than a third of the wealth, and the top 10 percent control 70 percent of the wealth. It’s only getting worse.

How did this happen? Conservative policies for years have reduced the role of government regulation, lowered taxes and created a capitalist culture that has widened the income gap. Conservatives are right that wealth is being redistributed in this country, but not the way they argue. Money is actually going from the poor to the rich, not the other way around.

In the real world, where powerful corporations and special interests influence the government, they cut taxes on the rich. Tax rates are at historical lows. In 1960, taxes were 90 percent for the top 1 percent of highest earners; now they are 34 percent — not including the myriad tax loopholes available to the wealthiest. And the rich and their right-wing agents in Washington still complain they are too high.

Tea Party leaders tell us that government is the problem so they want less of it. They are right and they are wrong — government is the problem but not the way they think. The government stood by while jobs went overseas so corporations could make more money. It did almost nothing to help retrain middle class workers who were laid off. It allowed Wall Street to run wild and create an economic disaster that destroyed people’s life savings. In other words, the government made some terrible decisions, but the idea that government can do good for Americans is still true. We should be urging the government to fix problems that are a direct result of protecting special interest groups and corporations.

The public has been given the impression that we have so much debt because their tax dollars are being wasted. While there may be some waste in government, most of the money is put to good use. Social security, Medicaid and Medicare are very successful programs that allow workers to retire with dignity and live longer lives. Federal departments ensure quality education, national security, environmental standards, and other vital services. Public sector workers do the jobs that keep our communities running and our citizens safe. If we take away basic services, it will only hurt our economy and hurt our country.

There are many calls for shared sacrifice, but few parties are willing to do it. If our political leaders are serious about reform, they cannot expect public employees and working families to carry the entire burden. We must start raising revenue and using the wealth that our system has generated for the rich to protect all citizens. That is the only thing that is fair and makes sense.

Unions were started to fight the negative consequences of the early forms of capitalism — sweatshops, unsafe working conditions, no workers’ rights — at a time when manufacturing and other blue collar work made up a larger part of our economy. For many decades, we were able to hold the line and create a middle class. Now, corporations and special interests are intent on reversing our gains. We must take a stand to defend our rights and our country, and convince our government to stop the war on workers, stop the widening income gap, or prepare for a possible revolution on our own shores.