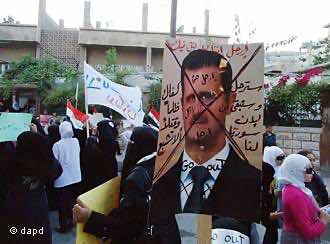 As the crackdown on pro-democracy protesters in Syria continues, Russia has lambasted Western nations over their efforts to draft new sanctions against the Assad regime.

Another round of sanctions against Syria was expected to be put to the United Nations Security Council late Tuesday, earning a sharp rebuke from veto-wielding Russia, which labeled the measures as “unacceptable.”

Germany, Britain, France and Portugal were expected to seek a Security Council vote on a resolution imposing “targeted measures” against the regime of President Bashar Assad for the crackdown that has killed 2,700 people since March, according to rights groups and the UN.

However, Russian Deputy Foreign Minister Gennady Gatilov told the Interfax news agency that new proposal was unacceptable “because it keeps the prospect of imposing sanctions on Syria.”

The proposal would see sanctions introduced if Assad failed to comply within 30 days with instructions to end the violence and enact reforms.

Western governments have expressed frustration with the council over its failure to adopt any resolution on Syria since pro-democracy protests began earlier this year.

Syrian opposition politicians officially announced the creation of a broad-based council demanding the end of Assad’s regime on Sunday.

The Syrian National Council “is a frame for the opposition and the peaceful revolution and represents the revolution inside and outside Syria,” Burhan Ghalioun, the chairman of the council told reporters in Istanbul, where the council met.

With 140 members from associations including the Muslim Brotherhood and Kurdish groups, the Syrian National Council, first created in late August, is seen as a vitally important show of unity for the opposition, which has been plagued by infighting.

Ghalioun said he was confident the council, which calls on other countries to intervene in the regime’s crackdown on protesters, would receive international recognition.

That came as Syrian troops backed by tanks retook control of the rebellious central town of Rastan after six days of fierce fighting. The prolonged clashes with army defectors and activists were thought to have been the worst in the six-month anti-government uprising.

The state-run SANA news agency reported that “life in the city has returned to normal after law enforcement personnel, backed by army units, entered the city and encountered the terrorist armed groups who terrorized citizens.”

Troops spread out across the town, about 112 miles (180 kilometers) from Damascus, after the defectors pulled out, according to Rami Abdel-Rahman, head of the British-based Syrian Observatory for Human Rights.

Land and mobile telephone services to Rastan were cut Saturday, making it impossible to get information from residents inside, although unconfirmed reports suggested that at least 100 people had been killed in the town since heavy shelling began on Monday.

“The city is almost destroyed due to the shelling from the army,” an anonymous activist based in Beirut told news agency DPA.

“Around 15 army defectors were killed and more than 80 others were injured in the fighting on Saturday,” he added.