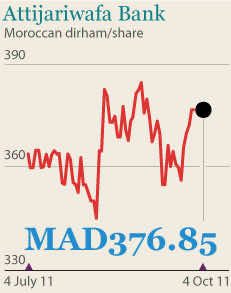 Morocco’s Attijariwafa Bank is expected to report big profits this year from its expansion, but questions remain if there is much upside left in the stock price.

The bank has been using income from its domestic operations to expand in Africa.

“We think the growth of the bank is already priced in,” said Kais Kriaa, the head of research at AlphaMena, an equity research house based in Casablanca. “The valuations are too rich at the moment.”

The analyst forecasts a 5.3 per cent increase in profits for the full year to 4.38 billion Moroccan dirhams.

The Moroccan bank pays out an annual dividend yield of 2.5 per cent, compared with 4 per cent for the sector average in the Middle East and North Africa region.

Mr Kriaa has a “sell” rating on the stock with a price target of 356 dirhams a share, down from the 376 dirhams it traded at yesterday.

The bank has sought short-term deposits while offering long-term loans, increasing the mismatch in tenure between its assets and liabilities, to boost its interest margin.

Morocco’s lenders have a weaker loan-to-deposit ratio, at 100 per cent, compared with their Gulf counterparts at 90 per cent.

That ratio has improved substantially from 2009, when the regulator had to step in to ease a liquidity crunch.

For Attijariwafa, the ratio stood at 105 per cent as of June.

“It means they will have to focus on growing their deposit book if they want to keep on lending at the same rate,” Mr Mauve said.

The bank’s largest shareholder, Société Nationale d’Investissements, is a conglomerate owned by the country’s royal family.