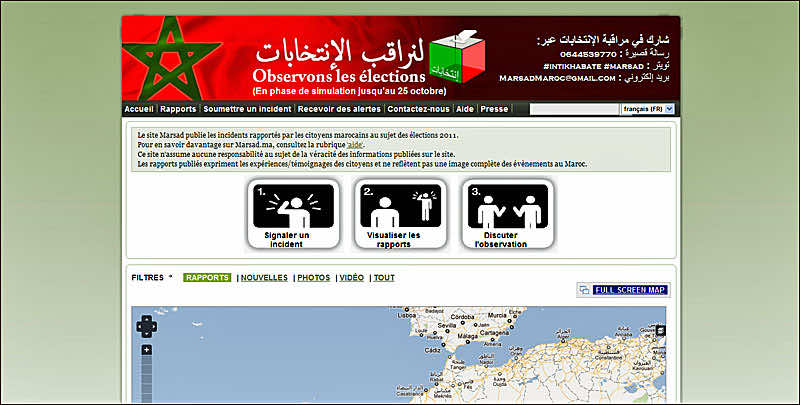 Casablanca – From text messages to Facebook and Twitter, new resources are available to Moroccans to exercise their civil rights. To take advantage of the interactivity and ubiquity of information technology, the Moroccan Human Rights Association (OMDH) recently created a website to serve as an online monitoring centre for the kingdom’s November 25th legislative elections.

Launched September 26th in a trial version, Marsad.ma is a platform that enables people to find information on the elections. In addition, it allows citizens and observers to monitor the vote by reporting and learning about incidents, failures or irregularities associated with the election process. The full site is set to go live a month before the poll.

“This year, given the changes occurring across the region and the importance of the internet as a citizenship tool, we decided to explore digital technology and new media,” said Mounir Bensalah, an observer and member of the Marsad team.

More specifically, the website will enable local OMDH observers to gather, process and check information. “It’s also a special tool that offers better and wide coverage of the country by encouraging citizens to get involved in the observation process,” Bensalah added.

The initiative draws on the experience of similar projects in several countries around the world, such as the Kenyan site Ushahidi.com. The Kenyan civic monitoring website was launched in the aftermath of the bloodshed that followed the 2008 presidential elections.

The Marsad project arose out of feedback from the OMDH and civil-society groups, which have monitored elections in Morocco since 2002.

Internet users will be able to submit observations publicly or anonymously by filling in an online form on the incident they have observed, the location and the date. Another feature of the site allows photos and video footage to be attached to every report.

“The functionalities of the Marsad website are well suited to the Moroccan electoral context and the failings that could occur during the forthcoming elections,” said Omar El Hayani, a blogger and member of the Twitter community Twittoma.

“One small flaw is that the creation of Arabic versions of some sections has not yet been completed,” he added.

The Marsad homepage will not be the only avenue for submitting reports. In parallel with the website, the monitoring tool will also enable internet users and observers to use other ways of reporting incidents during the elections – in particular, text messaging, Facebook and Twitter.

“The ideal situation will be one where complaints reported on the Marsad website will be verifiable and could serve as evidence in court against fraudsters,” El Hayani said.

This article was first published in Magharebia