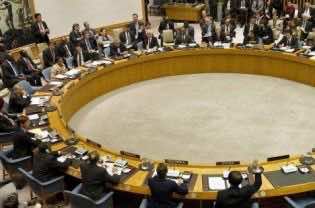 Russia and China have today used their veto at the United Nations Security Council to block a draft resolution that would have condemned the atrocities committed by the Syrian regime against its people and threatened to take further measures against it if it does not comply.

Lebanon, India, Brazil and South Africa abstained from supporting the draft resolution, which had been submitted by the four western European countries that are currently members of that Council, the UK, France, Germany and Portugal. The draft received concurrent votes from the rest of the members of the Council, affording it the necessary nine votes required to pass had it not been for the negative vote by Russia and China, two of the five Security Council permanent members who have veto power.

The draft calls for a stop to violence in Syria and for bringing those responsible for it to justice. It stresses the sovereignty, territorial integrity and unity of Syria, and emphasizes that any resolution to the ongoing crisis can only be attained through national dialogue.

In an attempt to avoid the Russian and Chinese veto and to assuage concerns expressed by India, Brazil and South Africa, the sponsors of the draft resolution have over the past few days diluted the language and stripped it of many elements that would have put increased pressure on the government of Syrian president Bashar al-Assad. The last paragraph which would have threatened further measures to be taken against Syrian if it does not comply was modified to delete the phrase “including sanctions”. On the other hand, language was added to “balance” the text by condemning violence by “all parties”.

The initiative for a draft Security Council resolution in response to the actions of the Syrian government and security forces was first taken in May, when a draft was circulated among Council members by the same sponsors of the latest draft resolution. In response to the increasing level of violence, detention and other atrocities committed in Syria by security forces and the militia supporting them, another draft was put forward that included proposed sanctions against the Syrian leadership. Over the past months, in face of stubborn resistance by Russia, the sponsors of the resolution have dropped the sanctions measures and replaced it with a threat of imposing sanctions.

The position taken by Russia and China on a resolution against a long-time ally in the Middle East is hardly surprising, especially given that they have repeatedly insisted that they are opposed to it. It is in line with their traditional reluctance to consider what they see as unjustified interference by the Security Council in the internal affairs of United Nations member states. But it appears that the sponsors of the resolution had been hoping until just before the vote that Russia and China would stop at abstention and not go as far as vetoing the measure. The consideration of many situations by the Security Council has seen initial and temporary reluctance on the part of Russia and China, which is generally attributed to an attempt to project super power image and a reminder to the world that they possess veto power in the world body as well as a negotiating chip to be used to gain diplomatic or other benefits. In many situations that reluctance disappears eventually and measures are passed after some pressure by the US and its allies.

The anger at the blocking of the draft resolution was most noticeable in the statement by the United States representative to the United Nations, Susan Rice, who used harsh words against Russia and China accusing them of choosing the sale of weapons to the Syrian regime over protecting civilians from being targeted by violence. Rice, as well as the her French and German counterparts, pointed out that the Syrian people now knows who is on their side and who is against them in an apparent attempt to capitalize on the situation in the Council and gain political currency with Syrians. Representatives of those and the other countries that voted for the draft resolution stressed that they would continue to push for the Council to take action on Syria and assume its responsibility as regards the crimes of the Syrian regime against its own people, which amount to crimes against humanity.

In statements read by representatives of countries that disapproved of the draft resolution, they repeatedly stressed that the measure would do a disservice to efforts to resolve the situation in a peaceful manner through an inclusive national dialogue. Most of them cited concerns about the instability spilling out from Syria to the region if more pressure were to be placed on the Syrian president, due to the regional weight of Syria and its crucial geopolitical importance for its region.

The Lebanese Ambassador to the UN gave a very brief statement, in which he reiterated that his country supports the sovereignty, territorial integrity and national unity of Syria and the security of its people and said that his delegation had abstained today in line with the position it took on 3 August (when it dissociated itself from the consensus within the Security Council on the presidential statement it adopted on that day regarding the violence in Syria). That position received much criticism including by many in Lebanon, who accused the Lebanese government of acting against the values of its people and their permanent brotherly bonds with the Syrian people, and of acting according to the directives of Hezbollah.

In his statement about the Security Council after the vote, Bashar Jafari, the envoy of the Syrian regime to the UN, repeated his government’s now well-known characterization of the situation in Syria attributing the violence and instability to what he called “terrorist” and “armed groups”. He saw the draft resolution as one aspect of a large conspiracy against his country, its people and its whole region, and went to great lengths to point out what he considered enormous human right abuses by the countries who had supported the draft resolution, at times citing examples like the colonial era to attack the sponsors of the draft resolution. Jafari insisted that his government has initiated and implemented real reforms and that no efforts by any country would be able to topple that government.

With the Security Council unable to reach an agreement regarding the situation in Syria, less pressure is now put on the government of Syria to comply with international call to stop the use of violence and respond to the requests of the Syrian people. The Security Council has not used its power to make binding decisions that would require the Syrian government to comply with international decisions such as the Human Rights Council resolution of last April that condemned the violence in Syria and called for a mission to be dispatched to that country. A resolution by the Security Council would also be required to refer to the International Criminal Court the atrocities that the United Nations Human Rights Commissioner has said could amount to crimes against humanity. United Nations Secretary-General Ban Ki-moon last month issued a strong statement in which he said that it is high time the Syrian regime stopped the violence it is committing against the people of Syria.