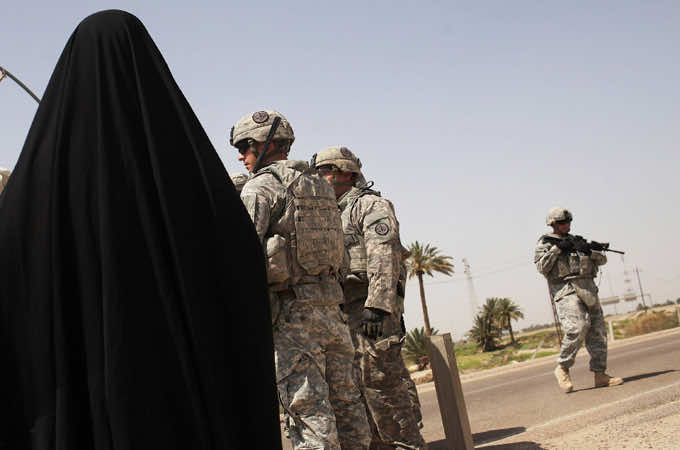 Baghdad says US military trainers are needed past December 31, but will not allow them to be above the law.

Nouri al-Maliki, the Iraqi prime minister, has won enough backing from Shia, Sunni and Kurdish political blocs to keep some US soldiers in Iraq as military trainers, but without granting them immunity if they commit crimes.

Baghdad and Washington must still negotiate over how many troops will stay on and how long they will stay after the December 31 deadline for their withdrawal from Iraq.

“The leaders agreed on the need to train the Iraqi forces and to complete their arming as soon as possible and on the need to support the Iraqi government,” said Ross Nuri Shawis, Iraq’s deputy prime minister, reading a statement.

He continued: “The people who attended the meeting agreed there is no need to grant immunity, in addition to that they suggested training should take place in Iraqi military bases only.”

Ali al-Dabbagh, Iraqi government spokesman, said the number of trainers would be decided according to Iraqi needs.

Only supporters of Muqtada al-Sadr, an anti-US Shia leader, rejected the accord. His Mehdi Army militia once battled US troops but he is now a key ally of al-Maliki in parliament.

Immunity from prosecution is a key issue for the Pentagon, which has resisted the risk of American soldiers ending up in an Iraqi court.

Last August, Admiral Mike Mullen, the then-chairman of the Joint Chiefs of Staff, said the US would only consider an immunity deal if it were passed by the Iraqi parliament.

The immunity issue is equally contentious for Iraqis who are still trying to regain their sovereignty now eight years after the US-led campaign to oust former leader Saddam Hussein.

David Mack, a former US ambassador and state department official, told Al Jazeera: “It’s the very strong view of the Pentagon and the US military with the support of the US Congress that American military personnel engaged in missions with the agreement of a local government should be immune from prosecution.”

Mack added: “This is a longstanding of legal view and in some places we have special treaties with the government such as the case with US military in Japan, for example, and Germany.”

Iraqi political leaders have been wrestling for months with whether to ask some American forces to stay past their December 31 departure date.

There are currently an estimated 43,500 American troops in the country. Under a 2008 security agreement, all are required to leave by the end of 2011.

Iraqi leaders announced in August that they were opening talks with the US on maintaining some sort of training presence in the country past this year.

But there has been little traction since then as the US military continues to draw down its forces.

Washington is considering leaving 3,000 to 5,000 troops to train Iraq’s police and military, according to US officials familiar with the discussions but who spoke on condition of anonymity.