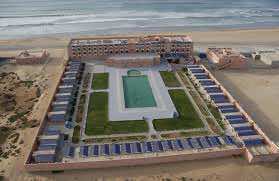 The development in the southern provinces has been geared to benefit the local population, Henri Louis Vedie from the HEC School of Management said on Tuesday in New York.

Speaking during a debate of the UN General Assembly’s 4th Committee, Vedie recalled that before 1976, the southern provinces were nothing but desert and sand. Since then, he added, roads and airports had been constructed, and access to drinking water and electricity had improved.

In this regard, 90 per cent of the populations is now supplied with water and electricity, he underscored.

Vedie also said that the infrastructures set up along the 1000 km long cost of the southern provinces as well as stable prices had allowed for the establishment of fishing villages.

He said the EU had pointed that the investments in fisheries had exclusively benefited the local population.

Similarly, proximity hospitals were built to meet the populations need, he went on to say.

In terms of education and literacy, a considerable improvement has been witnessed in the southern provinces with the number of high school degree holders increasing twenty-seven fold over 1983-2006 and illiteracy rate being lower than the national average, he added.

In the southern provinces there is no squandering or plundering of resources, Vedie made it clear, noting the increase in the use of renewable energies and the promotion of environment friendly development in the region.