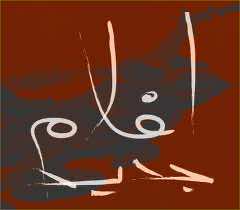 Newly deposed Arab dictators might have been well advised to have paid attention to the works of their home-grown artists more closely: Many visualized the revolutions in their countries long before they happened.

Take the photograph by the Moroccan Hicham Benohoud, one of the pieces by dozens of artists shown at this year’s Marrakech Art Fair, which was held from Sept. 30 to Oct. 3: It shows a child physically tied to his environment, and it speaks with contempt for the country’s social inequalities.

For the fair’s organizers, there could not be a better moment to display these works as the world is watching the region, and showing a particular interest in the art being created here.

According to Brahim Alaoui, who curated one of the fair’s shows, “Images Affranchies” (Liberated Images), current events caught up with the works of the 18 artists shown in the photography and video exhibition. While freeing themselves from traditional formats, the artists have managed to break taboos to show the simmering discontent that led to explosion, while at the same time expressing a craving for personal freedom.

“Many of these artists have tried to convey messages, ideas that converge toward the demands of people across the Arab world: freedom of speech, social justice and emancipation,” said Mr. Alaoui. “The general context eventually proved them right.”

The works on show reflect the adamant demands by protesters across the region that led to the toppling of leaders in Egypt, Tunisia and Libya, showing the discontent and desperation in countries crippled by corruption and injustice. They also position these artists, whose desire for freedom was strongly reflected in their works, as visionaries of the changes these countries were to undergo.

The Moroccan artist Mohammed El Baz, whose complex installations combine sculpture, video, light and photography, said his works were an attempt “to build a space of possibilities to heal the incurable.”

Viewing them, they represent an endless search for a solution to a grim fate. In his previous works, he also imagined bodies caught on fire long before the Tunisian street vendor Mohamed Bouazizi immolated himself.

The Egyptian photographer Moataz Nasr tells the story of his country’s people through a series of poignant pictures, among them, photos of “Eish,” the flat bread that is so vital to the Egyptian people.

The Tunisian artist Faten Chouba Skhiri says that even the arts were politicized under former President Zine el-Abidine Ben Ali: For years, the state regulated the arts and decided what artists should produce. Now, the revolution has energized artists, while also giving them hope and newly acquired freedom that they are still learning to work with.

“The revolution is not over yet,” she said. “The real fear is that the revolution fails. We are in a transitional period and we are still digesting extremely intense changes. There is a very strong need for structures to encourage artists. We don’t even have an art museum to see the evolution of our art.”

Giving visibility to the artists was one of the main accomplishments of the Marrakech Art Fair, being held for the second time. About 48 galleries were invited, attracting buyers, such as the prestigious Pompidou Center in Paris, interested in this new generation of contemporary artists.

The French heiress Elisabeth Bauchet-Bouhlal, who inherited the Es Saadi Palace that hosted the fair and considers the country her home, has also helped to finance it. She says she is a lifelong believer in the promotion of artists and insists that collectors should fully realize how much they could help local artists by buying their pieces instead of shopping for art abroad.

People in the Arab world “are starting to understand that interesting things are happening in their own countries,” she said. “They are realizing that they can find fine pieces of art here without having to go abroad. It is great to start having a Tunisian presence in art fairs. And since the revolution, slowly more collectors are starting to pay attention to what our artists are producing.”

Some say that while the artists are getting more exposure, the Arab Spring is only the bud waiting to bloom.

“Before expecting foreign art collectors to buy the works of our artists, it’s extremely important that we encourage them locally,” said Lilia Ben Salah, owner of the gallery Al Marsa in Tunis, standing in front of a photograph of street graffiti of scrawled messages of freedom taken by Rym Karoui during the Tunisian revolution.