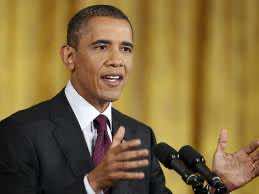 US President Barack Obama has said that the “Occupy Wall Street” protests in New York and other US cities reflect “broad-based frustration” among Americans with how the US financial system works.

Obama spoke on Thursday at the White House, adding that the protests were indicative of public anger that those who helped cause the financial crisis are fighting efforts to curb abuses.

“I think it expresses the frustrations the American people feel, that we had the biggest financial crisis since the Great Depression, huge collateral damage all throughout the country … and yet you’re still seeing some of the same folks who acted irresponsibly trying to fight efforts to crack down on the abusive practices that got us into this in the first place,” he said at a news conference.

Obama also used the opportunity to push forward his $447bn jobs bill, the American Jobs Act, saying that it was designed to ensure tougher oversight of the financial industry.

“Any senator out there who’s thinking about voting against this jobs bill when it comes up for a vote needs to explain exactly why they would oppose something we know would improve our economic situation at such an urgent time,” Obama said.

Congress is to vote on the bill before the end of the month.

Steps away from Obama’s news conference, protesters on Thursday converged on Freedom Plaza in the nation’s capital to establish another “occupy” camp and rally under the banner “Get money out of politics!”

Al Jazeera’s Alan Fisher, reporting from Freedom Plaza, said, “There are many desperate groups here. There’s not just one group with one message.”

“There are anti-war protesters here, anti-globalisation protesters, anti-capitalist protesters. People who are just saying that the financial system is broken,” he said.

Meanwhile, in the northwestern US state of Washington on Wednesday, police arrested 25 people among a crowd of about 200 who were part of the ‘Occupy Seattle’ protest. Police also removed demonstrators’ tents and other belongings.

In San Francisco, California, “Occupy SF” protesters were given a notice from the police department, which stated: “This encampment is a violation of the law.

“Accordingly, you are being ordered to take down this structure. Refusal to comply and/or obstruction of our efforts to remove the structure may result in your arrest.”

Around 5,000 demonstrators converged on New York’s financial district on Wednesday, their ranks swelled by nurses, transit workers and other union members who had joined the protest over economic inequality and the power of US financial institutions.

Police arrested at least 28 people and used pepper spray and batons to confront the crowd after protesters converged near police barricades.

According to protest organisers’ website, OccupyTogether.org, frustrated Americans have planned “Occupy Together Meetups” in more than 500 cities across the nation.

The “Occupy Wall Street” protests started on September 17 with a few dozen demonstrators who tried to pitch tents in front of the New York Stock Exchange. Since then, hundreds have set up camp in a park nearby and have become increasingly