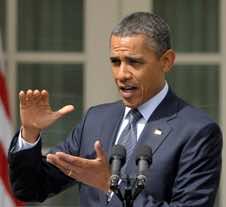 President Obama seems to have been emboldened by Warren Buffet’s New York Times August Op Ed, in which Buffet revealed that he pays a lower overall tax rate than his office staff. The second richest American, abiding by US tax laws, paid in 2010 only 17.4% in federal taxes compared to a range of 33% to 41% among his staff.

After trying to accommodate Republican demands during the debt limit debate, the President responded in September with a jobs creation plan. He has called to fund the plan, in part, through what he calls the Buffet Rule that amends this imbalance in the tax code. “Middle-class families shouldn’t pay higher taxes than millionaires and billionaires. That’s pretty straightforward,” stated Obama one week after announcing his jobs plan.

The plan has been characterized by Reuters and many other news agencies as, “aimed at ensuring millionaires pay at least as much tax as middle-class families.”

Last week, Paul Krugman writing in the New York Times, in a piece called The Social Contract, reminded Americans of the purpose of taxes: to provide society with services like streets, street lights, education and police (including to protect the property of businesses and the wealthy). Along with a host of other public goods and services, this has enabled even the richest of Americans to obtain their wealth. Krugman made these points to support calls that the rich should pay more in taxes.

However, one thing has been missing from these commentaries. The wealthy in the US should not only be obligated to pay as much in taxes as the middle class. They should be expected to contribute even more than most Americans.

The wealthier one is, the more that person should contribute, as the rich are in the best position to help society meet its needs. This is a value that I always assumed was the logic of the progressive tax system; that at certain levels of income, you pay higher tax rates because you are already able to obtain basic needs as well as many luxury goods to live comfortably. A progressive tax system is not about redistributing wealth as Republicans like to characterize calls to raise tax rates on high earners, but for society to meet the needs that it believes should be made available to its citizens. This includes education, infrastructure, health care, security; the “public goods” that economics classes teach would not be provided for in the free market must be provided by government. In addition, it has long been accepted that a wealthy society should strive to improve the quality of life for its less fortunate.

This is why Steve Forbes’ flat tax proposals when he ran for president in the Republican primary in 1996 and 2000 fell flat with voters. In the long-run, the revenue generated from a progressive tax code is also in the self-interest of the wealthy. Investments in infrastructure, for instance, are necessary for future economic growth. Or, for example, a widening gap in living standards and wealth can lead to greater social instability.

Astonishingly, despite rejecting Forbes’ main campaign issue just over a decade ago, we now have a system where many of the rich pay taxes at a lower percentage of their incomes than most other Americans. In 1997, the capital gains tax rate was reduced from 28% to 20%, and in 2003 it was reduced to 15%, one of the main factors that enable rich Americans like Buffet to pay much lower effective tax rates.

Another significant reason, of course, is that that the 7.65% payroll taxes for Social Security and Medicare are only applied on the first $106,800 of earnings. Since more than 90% of Americans’ incomes do not exceed $106,800, they are taxed the entire rate, while only a small portion of the earnings of millionaires is affected by the tax. In Krugman’s article, he pointed out that “one-fourth of those with incomes of more than $1 million a year pay income and payroll tax of 12.6 percent of their income or less.”

Today, Republicans have been able to object to Obama’s modest proposals because they cloak Forbes’ proposal in different terminology. Rather than propose a “flat tax,” they make claims like “the right to keep more of the money that you earn,” warn of the danger of taxing the “job creators,” and use slogans like “socialism” and “redistribution of wealth.” Detractors of increasing taxes on the rich, also, point out that the top one and three percent of Americans are paying the largest proportion of total United States income taxes in its history. (They conveniently exclude assessments which include payroll taxes). In raising this point, they overlook that this is the case because income inequality has increased to its greatest level since 1928. The top earning 1% in 2007 received 23.5% of income, compared to 9% in 1974. Naturally, despite having benefited the most from tax cuts, the share they contribute has gone up.

As Paul Krugman noted, taxes are part of the social contract. However, having reduced the progressiveness of the tax code, supporting policies that have concentrated wealth and income, and taxing capital much less than labor in recent years, this is part of the reason why the US no longer seems capable of providing services that Americans have come to expect. There seemingly exists a severe problem when NBC Nightly News, last week, reported that some school districts are now selling advertising space to major corporations, including banners in gymnasiums, and painting their logos on school lockers and buses, in order to raise revenue.

Obama’s call that the rich should pay more in taxes is an important start, considering the discourse in recent years. But the United States will need to go further than just making sure its richest citizens are paying “at least as much taxes” as the middle class. A progressive tax system is not just about fairness. It is how all societies are able to function at a practical level.