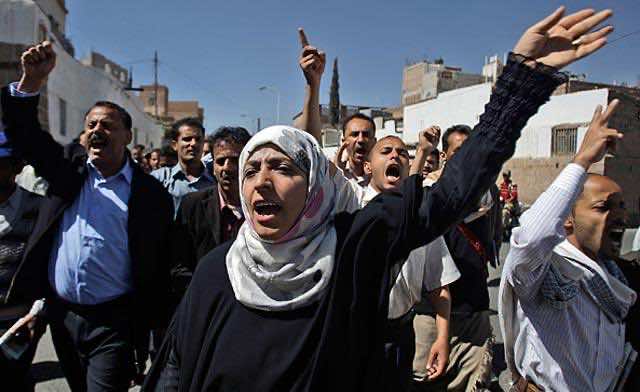 Three women who have campaigned for women’s rights and an end to violence in Liberia and Yemen, including Liberian President Ellen Johnson-Sirleaf, won the Nobel Peace Prize on Friday, the head of the Norwegian Nobel Committee said.

The other recipients are the Yemeni activist Tawakul Karman, who is the first Arab woman to win the prize, and Liberian, Leymah Gbowee, who mobilized fellow women against her country’s civil war including by organizing a “sex strike”.

The three women will share the prize worth $1.5 million with Johnson-Sirleaf, who faces re-election for a second term as president on Tuesday.

“We cannot achieve democracy and lasting peace in the world unless women obtain the same opportunities as men to influence developments at all levels of society,” Committee chairman Thorbjoern Jagland told reporters.

Honor for all Arabs

Talking to Al Arabiya from Sana’a on Friday, Karman said she was very happy to have won the Nobel Peace Prize and described it as “an honor to all Arabs, Muslims and women.

“I was not even aware that I had been nominated for it as I am preoccupied with the youth revolution in Yemen and truly, every man and woman in Yemen deserves this prize.”

When asked why she thinks she received the prize, Karman said: “I am part of society’s struggle to secure our political and civil rights. This is the struggle of human rights activists, of Yemeni youth and of Yemeni women.

“Our struggle began before the Arab Spring, in 2007 when we stepped up our demands for our rights and called for an end to corruption and tyranny. I am particularly proud of those women who have protested along with children and men in the streets against President Saleh.

She dedicated her pize to the women who have been protesting against Ahmad Mohammad Mansour (a tribal Sheikh who is a former parliamentarian, a father of a sitting parliamentarian and Saleh’s poet laureate) for almost over a year.

“I offer this prize as gift to those women,” she said.

Johnson-Sirleaf, 72, is Africa’s first freely elected female president. Gbowee mobilized and organized women across ethnic and religious dividing lines to bring an end to the war in Liberia, and to ensure women’s participation in elections.

The Committee added: “In the most trying circumstances, both before and during the Arab Spring, Tawakkul Karman has played a leading part in the struggle for women’s rights and for democracy and peace in Yemen.”

“It is the Norwegian Nobel Committee’s hope that the prize to Ellen Johnson-Sirleaf, Leymah Gbowee and Tawakkul Karman will help to bring an end to the suppression of women that still occurs in many countries, and to realise the great potential for democracy and peace that women can represent.”

Speaking by telephone from Monrovia, Johnson-Sirleaf’s son James told Reuters: “I am over-excited. This is very big news and we have to celebrate.”