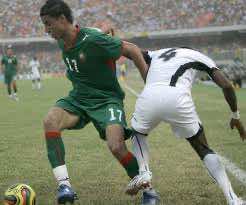 It is a potential watershed weekend for football on the continent as the preliminaries for the African Nations Cup finals come a close.

One thing is sure – the identity of the field of 16 for the finals next January in Equatorial Guinea and Gabon will known.

What is to determined, however, is whether we will witness an overhaul of the power balance of the African game or has a spate of upset results over the last 12 months been only a false dawn.

As the final weekend of qualifiers for the 2012 finals draws to a close, so too does an era of dominance by Egypt and Cameroon.

Both are already out of the running for a place in the final – Egypt losing the chance to add to a record-breaking three successive titles and Cameron failing in an era in which African Footballer of the year Samuel Eto’o proved a divisive leader.

Algeria, one of six African countries at the last World Cup finals, will also not be in the field for the next Nations Cup, which kicks off on January 21.

Staring at the cold reality of possible failure are giants like Ghana, Nigeria, South Africa and Tunisia plus Angola, who hosted the last continental championship in early 2010.

Weekend failure for these perennial contenders will add to the perception that the balance of power is sifting.

Indeed, it is now widely accepted the gulf that once existed between Africa’s established soccer giants and the rest is growing smaller.

Already Botswana have booked their place in the finals for the first time, emerging as runaway group winners against all expectations in a tough group that included two former World Cup finalists.

Uganda are set to qualify for the first time since 1978 and the likes of Malawi and Sudan could return to the list of tournament finalists.

What has been most marked in the qualifying campaign, however, is the emergence of sides usually seen as nothing more than also-rans.

Niger top their group going into the last round of matches. Before the 2012 preliminaries, they had only ever won twice in three decades of qualifying matches.

The Cape Verde Islands and Central African Republic are two other outsiders with a realistic chance at a first ever Nations Cup finals place while the biggest upset will come if Guinea can edge out Nigeria in Group B.

This all should be no surprise as recent years have shown an marked improvement by the so-called minnows. But what still must become clearer is whether there is also a change in the top pecking order.

Beside top ranked Cote d’Ivoire, who will likely finish with a 100 percent record in an admittedly easy group, the big guns of African football are teetering.

Even Ghana, who just over a year ago were charming the globe with their march to the World Cup quarterfinals, could be sidelined if they lose in Khartoum to hosts Sudan on Saturday afternoon.

Emerging as strong favourites to take the Nations Cup title in February are Morocco and Senegal.

Morocco must still make sure of qualification but are not expected to be troubled by Tanzania in Marrakesh on Sunday night.

Senegal have already qualified from the toughest group, and did so with a match to spare and with great aplomb.

Their attack is among the most formidable yet lined up by an African team and their dream of a first-ever Nations Cup certainly not far fetched.

The weekend’s results will deliver answers to the questions: are the giants are falling or was the qualifying particularly tricky this time round but at the end of the day the big teams managed to overcome the hurdles.

It is a weekend of potential historical importance.