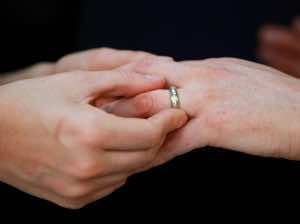 BRIDGEPORT– Federal agents arrested 10 people early Thursday following a lengthy investigation into a five-year scam in which marriages between Moroccan and American citizens were arranged to allow the foreigners to immigrate to the U.S.

The 10 who included residents of Bridgeport, West Haven, New Haven and Waterbury were brought before U.S. Magistrate Judge Holly B. Fitzsimmons who informed them they were charged with conspiring to violate the laws of the U.S., which carries a five year penalty

However, Assistant U.S. Attorney Rahul Kale informed the defendants that he intends to take the case to a federal grand jury next week and seek indictments for mail fraud, marriage fraud and making false statements on federal documents. The mail fraud charge carries a maximum 20 year sentence while the others carry a maximum five year term.

Additionally, Kale said the Moroccans, if convicted, could be deported following the conclusion of their sentences.

Arrested Wednesday morning by agents from the U.S. Department of Homeland Security’s Immigration and Custom Enforcement and Citizenship and Immigration Services were:

Only Kousa, Jaynes and Brooks were released on bond. Peck was recently arrested on a state larceny charge in Branford.

Agents used cooperating witnesses, tape recordings and travel records in determining that American citizens were paid to participate in sham marriages, which allowed Moroccans to immigrate to the U.S.

For instance, Elhadiri is charged with paying Brooks several thousands of dollars and arranging for her travel to Morocco in September, 2007 in order to file a petition to marry his brother in the U.S. The marriage took place in New Haven City Hall the following May. However, it is alleged that the pair never lived with or even saw each other following the marriage, according to court documents.

Khattabi further charges in his affidavit that Bahija Saadoun entered into a sham marriage with a U.S. citizen in 1999. Three years later she advised Immigration officials that she was being divorced and her application to remove marriage as a condition of residence was approved. She became a citizen on Sept. 29, 2005.

Four days later, she filed a petition for Hamid Kassem for him to come to the U.S. on a fiance visa which he did. Then on July 11, 2008, his petition to remove that condition was granted and he became a U.S. citizen on March 4, 2009.

Khattabi’s affidavit also alleges that Saadoun arranged similar marriages between her brother, Rachid and Jaynes; her sister, Fatima and Kousa; and her brother-in-law Khalid Kassem and Peck. Jaynes, Kousa and Peck were all paid to participate.

Additionally, evidence allegedly shows Brooks, Peck and Jaynes falsified documents alleging that they engaged in long-term, online relationships before traveling to Morocco to meet their future spouses. They also used photographs of them together as proof of the relationships.

After it became known that the marriages were being investigated, plans were made in at least one case to arrange for a divorce.

In Brooks’ case, she received money for 18 months and had her $900 monthly rent paid by Elhadiri, according to Khatabi’s affidavit.