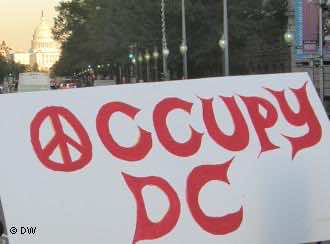 Without a common agenda or leader, demonstrators in Washington have made clear that they no longer want to foot the bill for the rich. A movement that began on Wall Street has now spread to cities across America.

It’s noon at McPherson Square, a small green space in the middle of the US capital Washington D.C., where around 50 demonstrators are calling for “jobs, not cuts” as they gather for their plenary meeting in order to plan their next move. These meetings, which are held twice a day, are used to set the demonstrators’ daily agenda, pass resolutions and plan their next activities.

The meeting is surprisingly well-organized for what appears to be a chaotic group at first glance. Whoever wants to speak has to wait his or her turn, cannot digress from the topic and is expected to keep it short. On the whiteboard, which someone organized, the agenda items have been set. Today, a march is planned through the city to the Newseum, a museum dedicated to the press, where Vice President Joe Biden and other politicians will exchange ideas during the afternoon.

No job, no apartment

Legba Carrefour, a slim 30-year-old, has participated in “Occupy D.C.” since day one. He lives in the capital and studied cultural sciences. His teaching position at the university was cut, and he was subsequently let go. In order to keep his head above water, he works at the cloakroom in a night club but still risks being evicted from his apartment.

“I am a big believer in the idea that you don’t demonstrate in the streets, but occupy one place and make it your own,” Carrefour said. “If they throw me out of my apartment, and I can’t live there, then I’ll make this here my new home.”

He does not intend to be driven away easily. At the outset on October 1, there were 10 people but everyday more are coming, says the young man with black hair and a piercing in his lip. Carrefour is convinced that next week there will be even more people occupying the square.

For Leslie, a veteran union member, the sight of the young demonstrators is heart warming. The 60-year-old explains that recently the unions have not been able to enforce fair pay and working conditions because there was a lack of broad support among the population.

“I’m sure that many of my colleagues and fellow union members would agree that that this here is a glimmer of hope,” she said.

Everyone is affected by the current economic conditions, and working people have to win America back, according to Leslie

“We have to make sure that the richest one-percent pay their fair share and do not live off the costs of the other 99-percent,” she said.

The liberal protest movement – which now has branches in Boston, Chicago and Los Angeles – needs the support of the financially well endowed and member-strong unions, according to Thomas Vernon Reed, an expert on protest movements in America.

“Movements grow fastest when they can capitalize on existing social networks,” Reed said.

In the past few days, the unions have become involved in the protests of Occupy Wall Street. They have clearly recognized that the energy of the young people moves their common cause forward.

Reed is the author of the book “The Art of Protest: Culture and Activism from the Civil Rights Movement to the Streets of Seattle.” He believes that the Occupy Wall Street movement and its offshoots could turn into something very big.

“Such movements normally start with very vague ideas and they grow with time in their ideology and demands,” Reed said.

These movements gradually recognize where they can apply leverage in order to affect the change that they are calling for.

“The civil rights movement also did not have a clear conception at the very beginning,” Reed said. “It took many years and many demonstrations before they developed their ideas.”

The question is not why “normal” people take to the streets, but rather why this did not happen much earlier given the growing social injustice, according to Reed. In addition, there’s a more than 9 percent unemployment rate and broad dissatisfaction with Congress directed at both Democrats and Republicans. Many people are also disappointed with President Obama.

In the afternoon, the flock of Occupy D.C. demonstrators starts to move. They are mostly younger people, but also fathers who have work yet are worried about their children’s future. Many have come a long way to participate, from New Orleans and even Alaska. The march goes down 14th Street through Freedom Plaza and then through the applauding crowd of another protest movement that is marching and also plans to demonstrate for days. They call themselves “October 11.”

Lisa Simeone, who belongs to the organizing committee of “October 11,” claims it’s an absolute coincidence that their demonstration has coincided with the Occupy Wall Street and Occupy D.C. movements, thereby gaining more attention. Simeone began to plan the protest months ago to coincide with the 10th anniversary of the start of the Afghan war. Yet she makes her sympathies clear.

“We stand in solidarity with Occupy Wall Street,” Simeone said.

Young and old with common goals

In contrast to the anti-Wall Street demonstrators, “October 11” has clear demands: End the wars and bring the troops home while removing the influence of money on politics. How the money saved should be spent is also clear, according to Simeone.

“In Jobs, apartments, education, health care and all the things that the people are lacking,” she said.

The crowd at Freedom Plaza is a bit older – many union members have come, war veterans and the “Raging Grannies” who criticize the power of the few by singing songs with clever lyrics. The 69-year-old Vickie Ryder from North Carolina is one of these self-proclaimed grannies. They use the Internet and e-mail to organize themselves and protest against a system that Ryder believes works only for the rich.

“My son had a terrible accident and needs a hospital bed at home,” Ryder said. Yet her insurance refused to pay, so she has to come up with the money herself.

Vickie Ryder wears a colorful floral print dress, a straw hat, and earrings in the shape of peace signs and carries a whistle in her hand. She is a protest veteran who is now retired and worries about her pension.

“There is nobody in this country that’s not affected [by the cuts in social spending], with the exception perhaps of the one percent which can still buy their champagne, yachts and fancy cars,” Ryder said.

The 99 percent has to work hard to scrape by while the wealthy one percent is doing well – that is the central motif of the movement, which is protesting for more social justice in the US. They are looking to Egypt and Tunisia and see the social unrest there as a model, which is not without justification even if the parallels to Egypt are limited, according to Reed.

“The demonstrators know, however, the recession in the US has a high price,” Reed said.

People die daily from malnutrition, insufficient medical care and other consequences of poverty. Reed points to the horrifying statistics.

After a short stop in front of the Newseum (an interactive museum of news – the ed.) the protesters return via the same route. Drivers announce their support by honking or giving a “thumbs up.” Police seal off the road temporarily when the hundreds of demonstrators cross an intersection or momentarily turn the street into a sidewalk.

Everything remains peaceful and relaxed. The demonstrators march past the high-priced restaurants on K-Street, the lobbyists’ home turf, where men in dark suits smoke cigars and drink wine at covered tables on the sidewalk. They want to enjoy the mild evening sun and observe the demonstrators with a mix of annoyance, disbelief and amusement.

Back at McPherson Square, Legba Carrefour is satisfied with the how the day’s events developed.

“We were on the streets, impeded traffic and called good slogans,” he said.

He only walked a short stretch and then went to a bar, he admits. Protesting is exhausting, and he will lead the evening plenary meeting. Decisions have to be made as to whether to stay at McPherson Square or join the other protesters at Freedom Plaza. They are proud that the movement developed spontaneously at exactly this place.

As darkness falls, some of the demonstrators are prepared to spend the night in McPherson. Whether they will stay directly in the middle of the square or on its outskirts has to be decided. Local ordinances forbid camping directly in the park overnight, and the demonstrators do not want to break any laws. But in this case, it appears that they will make an exception.

“And if they arrest us today, we will be here tomorrow,” one demonstrator calls.

But first a committee has to be established to deal with these questions. They also are considering how to make the square safe for women to stay the night there without worry. At some point they want to get into contact with the other protest movements in the rest of the country and make their demands together. There is still a lot of work for the Occupy D.C. demonstrators. But the protests have only just begun.