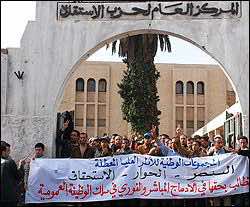 I vividly remember when my Sociolinguistics professor was explaining to us the meaning of a register. “It is a speech variety used by a particular group of people usually sharing the same occupation”.  Peculiarly and immediately, I went into a deep mediation, thinking about those who have no occupation. I soliloquized: “don’t they have a register?”

When I took to the streets, myself, during Ramadan protesting against the outrageous growing corruption and backing my unemployed friends’ endeavors, I discovered finding an answer to that weird question drove me to a very different and unexpected issue, but a gripping and a significant one.

The register of unemployed Moroccans is very typical and even distinctive. Mainly, you can recognize it just from the words and the expressions they use in their every day interaction. The following are only samples of countless examples:

– May Allah curse this nation…

– If I were abroad [Europe], I would never think of coming back…

– This country has offered us nothing but misery…..

The majority, if not all these expressions and others, mirror one unique truth, which is the fact that Moroccans have reached the climax of hopelessness and desperation.

This sense of wrath that sweeps over Moroccans, especially the unemployed, is not towards their country though it seems superficially so. The feeling of despondency is not at all due to their homeland simply because this latter is the source of their belonging, dignity and integrity. Rather, their buring anger is for those who represent this nation, those who once pledged to do their utmost to serve this country, but ended up furthering themselves. Their inner pain and agony are due to those, vicious stakeholders and politicians who have been robbing everything in this nation to cram into Swiss banks. Mistaken is the one who thinks that Ali Baba and the Forty Thieves is merely a myth and has nothing to do with reality.

Moroccans love their country even to adulation. I have enough and cogent examples to bring the ones who believe otherwise to come around to this point.

Imagine yourself sipping a cup of tea in a Moroccan coffee house, enjoying the vividness and the sociable atmosphere of the place. Suddenly, a foreigner enters and starts hurling insults at your country. What would be your reaction then? What would be your inner feelings? Notice for me if this impudent behavior was from a Moroccan citizen. I bet that you will not give it a second thought and you might even sympathize with that person and start seeking reasons that incited him to behave in such a manner.

Surely, our disappointment and frustration is not because of the nation as a homeland. It is because of those who are the avatar of this unlucky nation. The land, undoubtedly, deserves our ultimate love and respect.

Only last year, I witnessed an accident of two cars in Taza. The drivers rushed out of their cars with signs of rage and nervousness casting from their eyes. To my surprise, that feeling vanished into the blue once they knew that they were both from Tangier.

They forgot about the accident and started conversing about where they live exactly and their likes. It’s safe to state that feeling of belonging to the same land and the pride that one shows when talking about his/her origins have an enormous influence and a magical effect on Moroccans and humanity at large.

With this incident in mind, one can call to mind countless examples pertaining to the fact that feeling of harmony and familiarity between people emanates from, without ignoring other factors, the notion of national belonging. This sense of nationalism and identity becomes clearer on the macro level. Meaning, think of that accident in Paris, New York, Tokyo, or Sydney, how would those people react when they get to know that they were from the same country, city, or even neighbors? In plain English, the more distant we are from our native land, the more nostalgic and home-bound we become.

Any person who was forced to quit his homeland either to study or to work is bound to turn back to it at least for a visit. This is human nature, As if there is a powerful magnetic field that pulls us in. A friend of mine had been repeating indefatigably that he will never think of coming back to his homeland if he set foot in France and I bet that is the case with a large number of desperate Moroccans.

In stark contrast, once he got his residency papers and became a legal citizen in France, he did not give it a second thought to return to his home country for a short visit, and all his vows fell short and went away with the wind. More than that, he kept his word and married the girl he has been in love with before immigrating. Wise who said that blood is thicker than water. To be continued.

*Mahmoud Seddik is a contributor to Morocco World News.