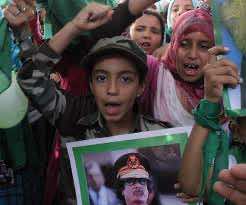 The United Nations said there should be no reprisals against residents of Muammar Gaddafi’s hometown should it fall to Libyan interim government forces, who on Friday launched their biggest assault on the city yet.

Libya’s ruling National Transitional Council (NTC) bombarded the town with tank shells and artillery rounds on Friday as concern continued to mount for civilians trapped inside and living in dire conditions.

“There’s no doubt that fighters from the NTC who have themselves witnessed gross human rights violations by Gaddafi forces are fighting against the hard core of those forces,” Ian Martin, U.N. special representative for Libya, told Reuters.

“It’s extremely important that the fighting ends in a way that respects the calls of the leadership of the NTC not to take revenge but to bring to justice within the law those who are responsible for war crimes on the other side.”

Thousands of civilians have streamed out of Sirte as anti-Gaddafi fighters — backed by NATO warplanes — shell and try to take parts of the city from pro-Gaddafi fighters using snipers, artillery and rockets.

Each side has blamed the other for civilian casualties and dire health conditions for the remaining inhabitants.

Martin said the NTC needed to ensure fighters assailing the town — many of them from the coastal city of Misrata, which endured months of shelling after rising up against Gaddafi — did not seek payback.

“It’s not easy of course to restrain people who have witnessed war crimes against their own people from the tendency to take revenge,” he said. “What I hope is they will convey that as strongly as they can to their fighters on the ground.”

Some people leaving Sirte have said they were sorry to see Gaddafi ousted. He transformed Sirte from a small fishing village into a city that acted as a second capital during his years in power.

Martin said the conclusion of fighting would colour the NTC’s prospects for a transition to a democratic state, and could complicate efforts at political reconciliation after the end of hostilities.

“That process depends on how the fighting comes to an end and what is then done following the end of the fighting,” he said.

“We are expressing our concern that the situation ends in a way that lays the foundations for national reconciliation rather than exacerbates the problems that a new government will face.”