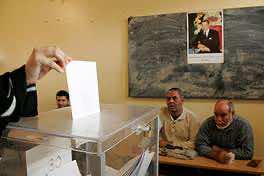 Moroccan political parties are preparing to sign a code of ethics developed by the interior ministry as part of efforts to eliminate fraud and boost transparency, just weeks ahead of the November 25th elections.

The proposed code seeks to ensure parties nominate honest candidates and report any fraudulent activities to authorities. The parties must also promise to run clean electoral campaigns, refuse to buy votes, resort to violence or use religion for political purposes. The document also seeks to encourage greater representation for young people and women.

The interior ministry will be obliged to remain objective, treating all political parties equally and punishing the use of public resources for electoral purposes.

The principle behind the document is to commit to certain areas which are not enshrined in law, such as the need to establish a younger ruling class, according to Mohamed Abied, secretary-general of the Constitutional Union party.

But in the opposition Justice and Development Party (PJD), optimism has been replaced by doubt among most of the party activists. PJD Assistant Secretary-General Lahcen Daoudi told Magharebia that even though the code of ethics was going to be signed, a number of political parties will not abide by its rules and will continue to engage in the same discredited practices.

Daoudi said that the parties and the government have a responsibility to raise moral standards within the electoral process. The PJD’s MPs have called on Parliament to block the election of anyone who does not pay their taxes or who has changed political parties more than three times.

Political experts said a code of ethics was praiseworthy but analyst Slimane Daoui argued that it was not enough to just sign commitments. The pledges have to be put into action to restore public confidence, he added. Daoui doubted that the political parties would be able completely to overhaul their approach overnight, given that the majority of them are trying to gain as many seats as possible.

“Rumours we’ve heard about the parties’ internal preparations suggest that the selection of dubious candidates is still in the cards. Let’s hope that will change over the first few days of the code of ethics being signed,” he said.

Teacher Ftiha Mochadi echoed the sentiment. If political parties abide by the proposed code of ethics, it will be an important step towards transparent elections that reflect the real wishes of the people, she said.

“Moroccans tend to be more used to warm words than real actions. But we can always hope,” Mochadi added.