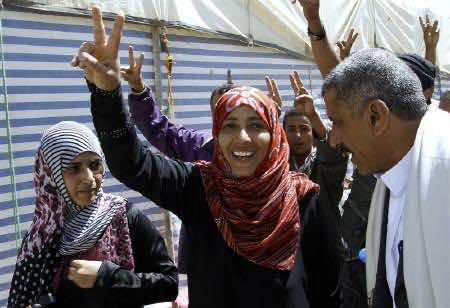 Three women from Africa and Yemen received this year’s Nobel Peace Prize for their non-violent pursuit of peace and the rights of women. A surprising decision and powerful message, says Deutsche Welle’s Ute Schaeffer.

Once again, the speculations were off the mark. The Nobel Peace Prize did not go to former German Chancellor Helmut Kohl and not to the European Union. Instead, three strong women from Africa and Yemen received the award.

With their decision, the jury made a strong statement and sent a clear signal: Women play an enormously important role in the pursuit of peace and democracy – in Africa as well as the Arab world.

The jury’s choice illustrates that there is no reason for women to retreat to their families or private lives after the demonstrations and peace movements, as could be the case in the Arab countries.

All three women show that only political participation and social responsibility at the highest levels can ensure that the interests and rights of the female half of society are represented and respected.

Liberia, in particular, is an excellent example that this is not the case in many regions of the world. As in all wars worldwide, the women bore a major burden in the more than 14 years of civil war.

In 2006, Ellen Johnson-Sirleaf tackled arguably one of the most difficult political tasks worldwide. Utterly fearless, steadfast and tough, she took up the fight against corruption and nepotism to return her devastated country and traumatized people to a normal life.

She was unfazed by the political machines and corrupt old-boy’s networks. She moved radically to clean up the mess, which brought her death threats more than once.

But the fact that the ‘Iron Lady’ of West Africa has been honored is a signal that goes well beyond the person herself.

Liberians will soon be going to the polls. For only the second time since the founding of the country in 1847 will there be proper and democratic elections. The vote, however, has been repeatedly threatened by a variety of hurdles. The old cadres are reappearing, undemocratic forces are returning to life.

The Nobel Peace Prize for the Liberian president is therefore combined with a further, and larger, political message: Freedom and democracy are not decided by protest movements alone.

They are decided first, by elections, and then by the creation of democratic institutions. That is as true for West Africa as it is for North Africa, where elections will be held in Tunisia and Egypt in October and November.

This year’s award to three candidates also underscores that there is a social as well as a political component to the struggle for peace and freedom.

Besides the active political leadership of Johnson-Sirleaf, two other strong women from civil society were awarded the prestigious prize: the nearly 40-year-old director of the African NGO “Women’s Network for peace and Security” in Africa, Leymah Roberta Gbowee, and the young and courageous women’s rights activist in conservative-Islamic Yemen, Tawakkul Karman.

Radical Islamists accuse her of inciting women to rebel against men. But the leader of the Yemeni women’s group “Journalists without Chains” is only calling for basic human rights to be respected: against violence and bans from education, against forced marriages and for more political participation.

The same thing that Liberian civil rights activist Gbowee has called for. She has fought together with other women in her country for peace and, after the civil war, was instrumental in helping a generation of war victims return to normal society. Without this grass-roots work, women’s rights would be much worse off.

Even in the 21st century, this cannot be taken for granted – and therefore the jury deserves our thanks.