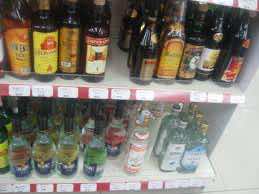 A wave of demonstrations against shops that sell alcoholic beverages is sweeping Algeria, prompting local officials in some wilayas to close a number of the stores under the pretext of “threatening public security”.

Several prominent Islamist figures recently kicked off a drive to collect citizens’ signatures to demand the authorities definitively close the stores. The campaign has prompted concern among authorities who fear that Salafists could use the protests to return to the political scene.

El Hachemi Sahnouni, imam and khatib of al-Sunna Mosque in Bab El Oued, and Abdelfatah Zeraoui, spokesperson for a movement known as the “Free Awakening of Children of Algeria’s Mosques”, called on popular neighbourhood committees to file petitions with authorities to close down the shops.

The comments came at a time when several wilayas were witnessing protests against shops selling alcoholic beverages. These protests started in Bejaia wilaya before they spread to other wilayas, including Oran and Algiers.

Local authorities found themselves forced to issue decisions closing these shops to avoid abuses, like those that took place in Bejaia province last summer where angry young people set a number of bars and liquor stores on fire.

Algerian Prime Minister Ahmed Ouyahia addressed this issue in a September 30th press conference, saying that the “decisions that were taken by some local authorities to close many shops selling alcoholic beverages were for security considerations”.

“Authorities must intervene as per the law in order to prevent any attempts to exploit these protests for political purposes that have nothing to do with citizens’ rights,” sociologist Mohamed Khalas told Magharebia.

He added that “certain Islamist parties are trying to mobilise the street at this particular time to show their power to the authorities and to impose themselves as a political force that can’t be ignored”.

A few days ago, scores of residents of al-Anaser neighbourhood attacked a shop selling alcoholic beverages located under a residential building, destroying a section of the store and setting it ablaze before security forces intervened and engaged the protestors for hours, arresting some of them.

Other wilayas witnessed similar events, including Ain Kercha, Oum El Bouaghi wilaya, where citizens sealed off one of the main roads, demanding the closure of a bar in their neighbourhood. The events later deteriorated into skirmishes between the residents and the bar owner. The bar owner’s brother was killed.