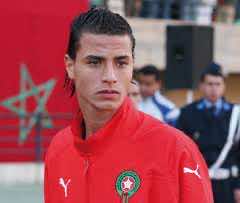 Arsenal striker Maroune Chamakh has returned from suspension to help shoot the Atlas Lions of Morocco to the 2012 Africa Cup of Nations.

The big striker missed the 0-0 draw away in Central African Republic last month.

Both Morocco and CAR are tied on eight points each with the Moroccans enjoying a slight edge by virtue of a better goals difference as both teams are also tied on the head-to-head rule after they recorded 0-0 draws between them.

Group D has proved to be one of the most exciting in this series as any of the four teams – Morocco, CAR, Tanzania and Algeria – are still in with a chance to qualifying for the tournament proper.

Morocco will be expected to win on Sunday to book their passage after they won the first clash in Tanzania 1-0.

However, the East Africans are also very mindful of the fact that a win for them away in Morocco would change the complexion of the entire group.

Last year, they did well to secure a point in Algeria at the start of the qualifying campaign meaning their chances of getting a result cannot be dismissed out rightly.

Unfortunately, the Tanzanians have lost their skipper Shadrack Nsajigwa after he injured his groin while training with the team ahead of this crunch Group D game in Marrakech.

Losing the defender represents a big blow to Tanzania’s efforts of reaching their first Nations Cup finals in 30 years.

“Scans have shown that the best course of action for Nsajigwa is rest and rehab,” said Tanzania FA spokesman Boniface Wambura.

“He is disappointed but it is a straightforward decision because he would not be fit enough to play in their last Africa Cup of Nations qualifier against Morocco in Marrakesh on Sunday.”