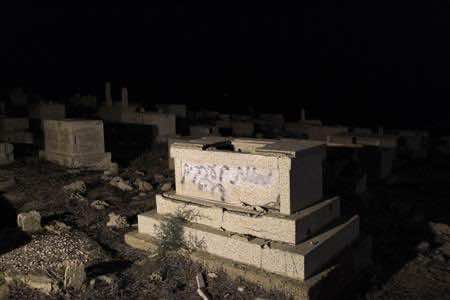 Dozens of gravestones were desecrated at adjacent Muslim and Christian cemeteries overlooking the sea at Jaffa and a fire-bomb was thrown at a nearby synagogue, Saturday, Yom Kippur, the Jewish Day of Atonement.

At least five tombs were smashed and some 20 others sprayed with Hebrew graffiti, including “Death to Arabs” and “Price Tag,” a slogan used by militant Jewish settlers in the occupied West Bank and their supporters.

The “price-taggers” have vowed to avenge any move by Israel to uproot West Bank settlement outposts built without Israeli government permission, and have set fire to mosques and vandalised both Israeli and Palestinian property.

Police spokesman Micky Rosenfeld said a fire-bomb thrown onto the roof of a synagogue in the Jaffa area caused no damage or casualties. He said an investigation had been launched and that patrols had been stepped up.

“We are looking into who could possibly be behind the (grave) desecration,” he said.

A few dozen Israelis and Palestinians turned out in a show of protest against the attacks and a local councillor blamed settlers. Jaffa is the ancient part of Tel Aviv, with a mixed Jewish and Arab population, including Christians and Muslims.

“All these extreme settlers are doing different activities and they are not paying a price for anything,” said Sami Abu-Shehadi, a member of the Tel Aviv-Jaffa municipality council.

“Settlers have been saying that they want to bring the conflict inside (Israel) and this is exactly what they are doing now,” he said.

Rosenfeld said there was no initial indication the suspects were settlers or settler supporters, and that there was also a possibility that they might be soccer hooligans.

“The desecration of graves is a forbidden and criminal act that defames our honour and is contrary to the moral values of Israeli society,” he said.

Monday, a mosque in a Bedouin village in northern Israel was set on fire and graffiti sprayed on its walls in an attack authorities have blamed on hardline Jewish settlers.

The attacks have drawn broad condemnation from top Israeli leaders and Peres, and the country’s chief rabbis visited the scene in a bid to calm tensions.

In 2005 a Jewish couple was charged for throwing a pig’s head into a Tel Aviv mosque in an attempt to derail Israel’s pullout from Gaza, which went ahead in August of that year.

In 2008 riots erupted in the coastal city of Acre in northern Israel when Jews accosted an Arab man who drove his car into a predominantly Jewish neighbourhood during Yom Kippur when all traffic halts and the country shuts down for 24 hours.