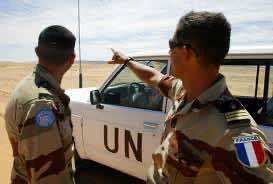 The recent unilateral decision by the Polisario to escort the patrols of the MINURSO, the UN Mission in the Sahara, exacerbates the already deteriorating relations between the two parties, said the Correo Diplomatico, a Spanish website that specializes in international affairs.

Relations between the Polisario and the MINURSO took a deteriorating trend following the involvement of the Tindouf-based separatists’ in drug and arms trafficking in the region, recalled Correo Diplomatico.

Last September, a Polisario leader, Taleb Ami, informed the MINURSO that all its patrols should be escorted by Polisario armed elements, reported the Correo Diplomatico.

“Such a decision is a violation of the cease fire agreement between Morocco and the Polisario,” the same source said, recalling that the agreement was signed under the aegis of the UN by virtue of which all movements of troops are banned in the area in question.

By contrast, added the Spanish website, the MINURSO counts on the full collaboration of Morocco, which imposes no restrictions on its movement.

Polisario’s unilateral decision is “a stark violation of the freedom of movement of the UN mission,” the same source quoted a Colombian former member of the MINURSO as saying.

“The Polisario seeks to cover the return of its fighters who were deployed in Libya” noted the paper, adding that the Polisario aims at being informed regularly about the patrols of the MINURSO so that it can prevent the UN from pinpointing the return of the Polisario mercenaries from Libya or Niger.

The Correo Diplomatico also said that sources on the ground reported “the arrival last week in Tindouf of dozens of four-wheel drive vehicles carrying thousands of Kalashnikovs,” provided by Gaddafi to the Polisario mercenaries.