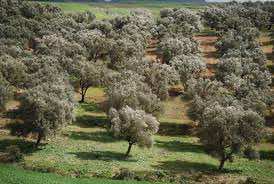 California olive growers are frustrated over a federal aid program that is providing millions of dollars to one if its global competitors: Morocco.

The funding is part of a humanitarian effort to rehabilitate and expand Morocco’s olive industry. But California growers say it will eat away at their share of the U.S. market for black ripe olives.

California, led by Tulare County, has a long history of growing olives. For decades, it has supplied the U.S. with a majority of its canned black olives. But cheaper foreign imports from Spain, Morocco and Portugal have edged the U.S. out of the sliced black olive market.

“This is just ludicrous for our government to help a country that will be sending its olives into the same market that I am selling to,” said Rod Burkett, a Porterville-area olive grower. “It just doesn’t make sense.”

Funding for the Moroccan olive growers is coming from the Millennium Challenge Corp., a foreign aid agency that Congress created in 2004 to combat global poverty. The Millennium Corp. has granted more than $7 billion to nearly two dozen countries for projects ranging from building roads to improving water supplies.

In 2007, the Millennium Corp. approved $697.5 million to be spent in Morocco over a five-year period. About half is devoted to the Fruit Tree Productivity Project that will, among other things, rehabilitate existing olive trees and expand production of olives, almonds and figs for the European market.

Millennium officials say they approved the program because their research determined the funding would result in only a “modest increase” in imports of Moroccan olives to the U.S. Officials said U.S. growers supply only about 50% of the nation’s demand for black ripe olives and about 2% of the olive oil market.

The goal of the Moroccan program is to plant new trees on about 150,000 acres for olive oil production.

“It is tough for farmers anywhere, especially with climate changes and marketing challenges and we fully appreciate that,” said Jonathan Bloom, a deputy vice president for the Millennium Corp. “But it is not any tougher because of investments we are making in Morocco.”

But California olive industry officials say there is no guarantee that some of those Moroccan olives, especially during times of overproduction, won’t make their way to the U.S. market.

“We just don’t need this right now,” said Adin Hester, president of the Visalia-based Olive Growers Council of California. “We have complained bitterly about this but it seems to have fallen on deaf ears.”

Rep. Devin Nunes, R-Visalia, has said that while he is not opposed to foreign agricultural programs or Millennium’s efforts, he does believe the federal government should be more aware of the impacts of its actions on U.S. farmers.

In the meantime, Valley olive growers prepare for what will likely be a weak season. Olives are an alternate-bearing crop — every other year is a smaller crop — and this year is an especially small one. Unfavorable weather during the growing season has contributed to a crop that is 67% smaller than last year’s.

Some growers are considering whether there is even enough of a crop to pick. Other growers already have made that decision. Of the roughly 26,000 acres of black ripe olives in California, about 1,200 to 1,400 were removed from production this year.

“People are not waiting for things to improve,” Hester said. “They are pulling them out and replanting [with] pistachios, almonds and other things.”