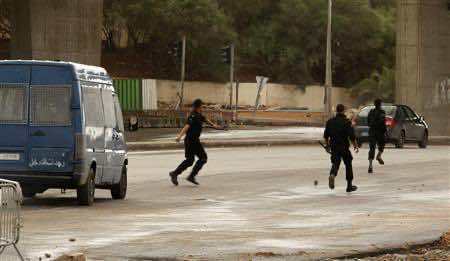 TUNIS  – Police in Tunis used tear gas on Sunday to try to disperse hundreds of Islamists who were attacking them with stones, knives and batons, the biggest clashes over religion in the Tunisian capital for several years.

Tension is mounting before an election later this month, the first since a revolution toppled Tunisia’s autocratic leader, that will pit Islamists free to express their beliefs for the first time against secularists who say their liberal values are under threat.

The Islamists were protesting against a ban on women who wear the niqab, or full-face veil, enrolling in university, and the decision by a Tunisian television station to broadcast animated film “Persepolis” which they said denigrated Islam.

Several hundred protesters gathered outside the main university campus in Tunis, and from there went to the working-class neighbourhood of Jebel El-Ahmar, north of the city centre, where the clashes with police broke out.

The mainly young protesters blocked a main road and threw stones at vehicles trying to get through. They shouted: “Allahu Akbar” (God is greatest) and “We will die for Allah!”

Tunisians will vote in an October 23 election for an assembly to draft a new constitution. The Islamist Ennahda party is expected to win the biggest share of the vote, alarming secularists who have traditionally dominated the ruling elite.

The clashes Sunday are “a very bad sign for the holding of democratic elections,” analyst Salah Attya told Reuters.

“This isn’t a good atmosphere … There are certain sides or parties which are pushing for an explosion of the situation before the election,” he said.

Ennahda, a moderate group which says it respects women’s rights and does not want to impose its religious values on Tunisian society, condemned Sunday’s violence.

“I am against infringing on the sentiments of people and their religion, but that does not stop us being completely against violence, whatever form it is in,” said an Ennahda official, Ali Larayad.

“We are in favour of peaceful protests to demand rights and on principle we condemn violence.”

The new caretaker government scheduled democratic elections and allowed Islamists to run for the first time, unleashing a tense debate about the role of religion in society.

The latest round of unrest broke out Saturday when Islamists tried to storm a university in Sousse, about 150 km (93 miles) south of Tunis. Administrators, enforcing a government ruling, had refused to enrol a woman wearing the niqab.

Earlier Sunday, Islamists protested outside the offices of the private Nessma television station in the centre of Tunis.

The station angered some conservative Muslims by broadcasting “Persepolis,” an award-winning film based on an account of a woman growing up in Iran under strict religious rule following the 1979 Islamic revolution.

Witnesses told Reuters about 300 protesters, some with sticks and knives, tried to set fire to the television station but were prevented from doing so by a large number of police. At least 40 people were arrested, the witnesses said.